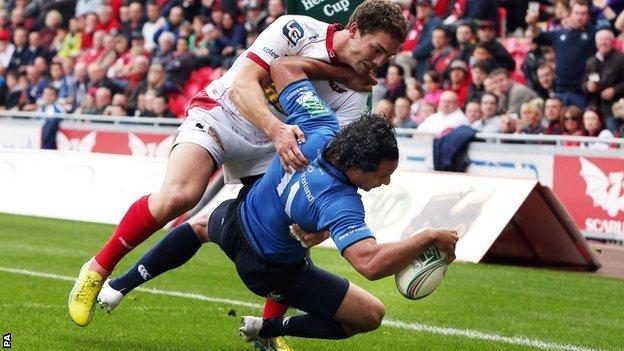 The Ireland fly-half kicked four penalties and a drop-goal, while also picking out Isa Nacewa with an accurate cross-field kick for his try.

Gareth Maule's try did give Scarlets hope when he outfoxed Brian O'Driscoll.

But that score and fly-half Rhys Priestland's eight points were only enough for a losing bonus point.

Having lost heavily last week in the opening round of matches, Scarlets needed to kick-start their Heineken Cup campaign by getting points on the board at home.

But the Welsh region struggled to contain Leinster's back-row at the breakdown and conceded a string of penalties.

Leinster, who had battled to a in their first Pool 5 match, took advantage.

Sexton had the defending champions on the scoreboard within two minutes, stroking over a penalty to pass 350 points in the tournament for Leinster.

The Ireland fly-half then unlocked the Scarlets defence with a fine steepling cross-kick for Nacewa to score, catching Wales wing George North badly out of position.

Sexton missed the conversion, but rival fly-half Priestland was also wide soon after with a penalty.

Another Scarlets infringement, this time for off-side, allowed Sexton to stretch Leinster's lead to 11-0.

Scarlets' best chance of a stuttering first half came when Scott Williams opted to stab through a kick for North close to the line, but Eoin Reddan was sweeping across and the scrum-half just knocked the ball away in time.

Sexton stretched Leinster's lead after the break when he struck a fantastic long-range drop-goal with little else on.

But Scarlets at last roused themselves as Priestland got them on the scoreboard with a penalty, then helped open up the Leinster defence with a canny long pass.

The fly-half took out the rush defence to find centre Maule, who impressively stood up O'Driscoll and then dummied Ian Madigan on the way to the line.

Leinster had to see out the last five minutes with 14 men after Madigan was sin-binned for taking out rival full-back Liam Williams in the air.

Priestland slotted the resulting penalty to bring Scarlets back to within seven points, which Sexton tried to take away from them but was wide with his replying penalty.

But a losing bonus point at home was far below what had been required to keep Scarlets in contention in a tough group and their quarter-final chances now look to be hanging by a thread.

Scarlets coach Simon Easterby: "It was difficult to take. Ultimately there was a lot of error count in our game and when you play a team like Leinster you have got to make sure your error count is low and you get a lot right in your game.

"In the first half they won the battle of the breakdown definitely. We had a chat about that at half-time and we knew going into the game the way Greg Garner referees.

"He doesn't give many tackles for the attacker assist releasing, so we hold our hands up there and we got that badly wrong. But no excuse - we got what we deserved in the first half."

Leinster coach Joe Schmidt: "We performed really well... we did put in a really good defensive performance together and to contain the sort of armoury the Scarlets can throw at you - we were delighted to keep them scoreless for so long.

"They had some really good moments of pressure but we managed to keep them off the line.

"We were frustrated that we could not get the one extra score after going 14-0 up to give us a buffer for their heads to drop, but fair play to the Scarlets they gave nothing up."