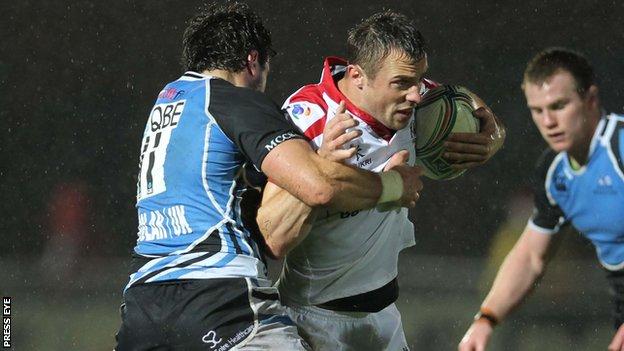 Ulster ground out a deserved victory over Glasgow to stay on top of Pool Four of the Heineken Cup as Paddy Jackson's 14 points proved crucial.

Chris Henry added Ulster's crucial try after the break as the visitors took a firm stranglehold on the contest.

The win maintains Ulster perfect record this season as they chalked up their seventh straight success.

Glasgow went into the contest hit by an injury crisis with Sean Lamont the latest to join a long list of absentees already including Chris Cusiter, Ed Kalman and Rory Lamont.

The heavy rain made handling difficult in the first half as the match quickly turned into a scrappy forwards battle.

After Ruan Pienaar had left a long-range effort short, Horne missed a great penalty chance from 30 metres in the 19th minute.

Ulster's second scrum infringement of the match did result in Horne kicking Glasgow ahead two minutes later but Jackson replied with two successful penalties after Byron McGuigan and Alastair Kellock had been penalised in quick succession.

Horne missed another good chance to level but Ulster produced pressure late in the first half near the Glasgow line before John Afoa's knock-on averted the danger.

Ulster continued to turn the screw after the break as a series of pick and goes had the Glasgow defence backpedalling.

Not for the first time, Glasgow were punished for coming in from the side with Tom Ryder the transgressor as Jackson kicked his third penalty.

By that stage, Glasgow goalkicker Horne was forced off by injury and the game was effectively over in the 61st minute as Henry finished off another Ulster drive as he got the touchdown.

Niko Matawalu's 77th-minute try, which came after strong running from Ryan Wilson and Alex Dunbar, was little consolation for the home side whose Heineken Cup hopes are now hanging by a thread after two opening defeats.