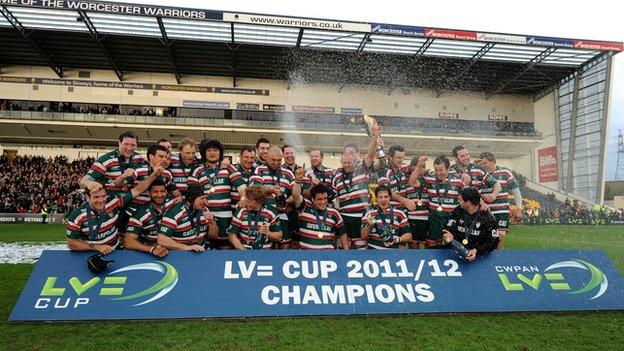 Worcester's Sixways stadium has once again been chosen to stage the LV= Cup final on Sunday 17 March 2013.

Both previous Sixways finals involved Northampton, who beat Gloucester 30-24 in 2010, before losing 26-14 to Leicester in last year's showpiece.

Warriors managing director Charlie Little said: "To be able to host the LV= Cup final for a second consecutive year and for a third time in the last four years is a huge achievement.

"We are delighted that the tournament organisers and sponsors feel Sixways is the ideal venue to host the final and that we are continuing to build a reputation for successfully hosting major cup finals and representative fixtures."

The LV= Cup, previously known as the Anglo-Welsh Cup, involves the 12 Premiership teams and the four Welsh regions.