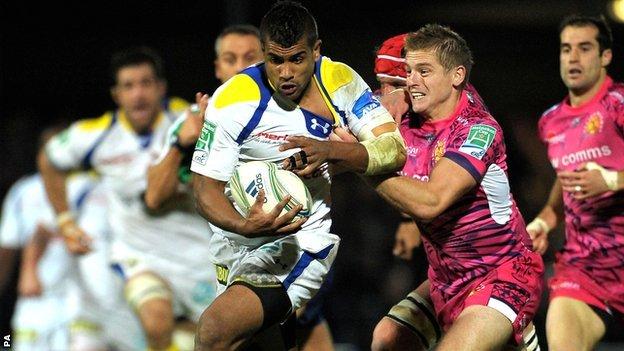 Clermont Auvergne ran in five second-half tries as Exeter's home debut in the Heineken Cup turned into a nightmare at Sandy Park.

The hosts led 12-10 at half-time through four Gareth Steenson penalties, with Clermont replying via a Napolioni Nalaga try and Morgan Parra's boot.

Two tries soon after the break, from Wesley Fofana and Julien Bonnaire, helped them into a commanding lead.

Further tries from Sitiveni Sivivatu, Fofana and Nalaga made it a rout.

The visitors scored 36 unanswered points in total in the second half to underline Exeter's baptism of fire in the Heineken Cup.

Their first ever match in Europe's premier club competition was a narrow defeat against champions Leinster last weekend, while Clermont reached the last four last season and were a Fofana knock-on away from reaching the final.

The 2010 French champions arrived at Sandy Park with a side packed full of internationals, including France centre Aurelien Rougerie, former All Blacks winger Sivivatu and Wales full-back Lee Byrne, but Exeter were not - at least initially - overawed.

They were every bit the equal of their illustrious visitors in a pulsating first half that had the home fans rocking, but the more the game wore on the more Clermont's greater punch and vastly superior strength in depth began to tell.

The Chiefs have opened up their game-plan this season, playing with greater pace and ambition, and they flew into Clermont from the opening whistle, with Steenson kicking them into an early lead courtesy of two penalties.

The home pack was putting the highly rated Clermont eight under significant pressure in both scrums and line-outs and when France scrum-half Parra missed a very simple penalty it looked as though the visitors might just struggle.

But after 16 minutes Canada second-row Jamie Cudmore stole a line-out and Nalaga - who had just been bundled into touch in the act of scoring - would not be denied a second time, the mighty Fijian winger ploughing over from close range.

Parra converted and the visitors were in business, although they failed to score a second try when unsighted referee John Lacey did not award the score after Gerhard Vosloo appeared to touch down, and Exeter spirited the ball away.

Exeter may have lacked the sheer power of the visitors but they matched them for pace and two more penalties from Steenson - to a solitary Parra reply - gave them a 12-10 lead at half-time.

The hosts lost number eight Richard Baxter to a yellow card just before the break and with Clermont beginning to punch holes in the home defence it looked ominous for the hosts.

The visitors duly took the lead with a 10-point blitz, Parra landing a penalty and then converting Fofana's try after the France centre profited from a Bonnaire turnover.

This time an unsighted official was on the visitors' side, with the touch judge missing a foot on the line from Fofana, but there was no doubt about their third try two minutes later as Bonnaire finished off a sweeping move to make it 25-12.

It was a stunning display of Clermont's attacking firepower and they finished the match off in style as Sivivatu, from close range, Fofana - with a silky 40m run - and Nalaga went over for converted tries.

Exeter boss Rob Baxter: "At half-time I thought we were doing pretty well but I was also sitting there thinking reality-wise, are we going to rue missed try-scoring opportunities from the first half and ultimately we did.

"I had said to the players that we wanted them to brave and that we want them to play from everywhere, making it as much as possible with the ball in hand.

"We did that fantastically well for probably 50 of the 80 minutes but for half an hour there was far too much coming in the other direction.

"They are a good side and when they had that momentum, they took the game away from us."