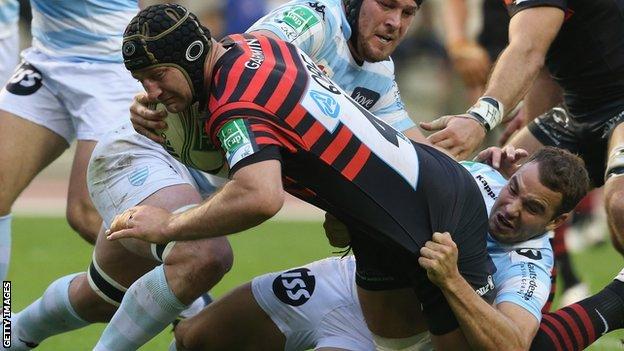 Saracens claimed their second Heineken Cup win of the season as they beat French side Racing Metro in Brussels.

First-half tries from Chris Wyles and Steve Borthwick, along with 10 points from fly-half Charlie Hodgson, helped Sarries to a 20-3 lead at half-time.

Another Hodgson penalty made it 23-3 before Juan Imhoff crossed for Racing to reduce the deficit to 23-10.

The Saracens v Racing Metro game at the King Baudouin Stadium in Brussels was the first Heineken Cup tie to be staged in Belgium.

But a Will Fraser try late on sealed a deserved victory for Saracens, who remain top of Pool One.

The French side took an early lead when they were given a penalty inside the first minute and Olly Barkley, who scored 14 points in Racing's 22-17 win against Munster last week, made no mistake.

This was the only time Saracens, who thrashed Edinburgh 45-0 in their Heineken Cup opener last week, were behind as a Hodgson penalty made it 3-3 after eight minutes.

Racing nearly scored the first try of the match as Benjamin Fall dived to reach a kick-through from Fabrice Estebanez but the right-winger could not reach it before the ball went out of play.

Minutes later, Saracens took the lead as Schalk Brits burst through a missed tackle from Karim Ghezal and off-loaded to Wyles, who scored on his 100th first-team appearance before Hodgson added the extra two points.

Sarries extended their advantage to 17-3 inside 30 minutes when captain Borthwick bundled home after a sustained spell of pressure from the English club, who were the designated home team at the King Baudouin Stadium in Brussels.

It was a rare try for Borthwick, who dived over, breaking through Barkley's challenge, for his first try of the season and his first in European competition in seven years.

Racing's task became more difficult when open-side flanker Bernard Le Roux was sin-binned towards the end of the opening period and Hodgson continued his perfect kicking performance to move Saracens 20-3 in front.

Saracens were awarded a penalty during their man advantage but Hodgson missed it, only the sixth time he has failed from the tee this season.

Racing had a chance to reduce the gap early in the second half when a burst from Benjamin Fall let in Fabrice Estebanez but a superb tackle from Brad Barritt saw the French side lose possession only yards from the line.

Le Roux returned to the pitch but only remained on it for another four minutes after suffering a shoulder injury.

Saracens took 18 minutes to score any points in the second half, when they extended their lead to 23-3 with another Hodgson penalty.

But Racing soon grabbed their first try of the match when Fall fed Juan Martin Hernandez, who produced a basketball-style overhead pass to cut out three Saracens players for Imhoff to score.

Estebanez added the two points before a penalty from replacement Gaetan Germain brought Racing within 10 points.

However, Fraser sealed the win in the last five minutes with an easy run-in another excellent dart and offload from Hodgson, although Sarries could not grab a fourth try which would have given them a bonus-point win.

Saracens now have nine points from their opening two matches with the other two sides in Pool One, Munster and Edinburgh, meeting in Limerick on Sunday.

Saracens boss Mark McCall: "If you win 30-13 against a side like Racing, you have to be reasonably satisfied.

"We went through every emotion today. There was some outstanding stuff in the first half, Racing were chasing shadows at times, but it was frustrating at times in the second half.

"Winning the match 4-0 in terms of points keeps us in control of the group. Nine points from the first two games is a pretty good return.

"The important thing is to gain control of your group and we've done that, but now we have the small matter of Munster back to back."