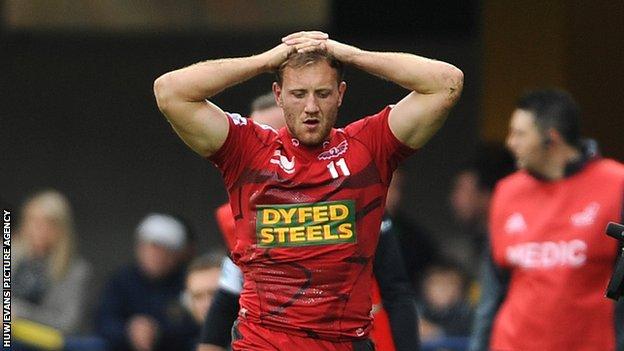 Morgan Stoddart has escaped further sanctions for his dismissal in Clermont Auvergne and is clear to play in Scarlets's European game with Leinster.

The Wales wing was sent off in the first-half for a second yellow card in their Heineken Cup pool defeat in France and could have suffered a ban.

But Stoddart was cleared for Saturday's game as "neither offence involved foul play directed at an opponent."

And the disciplinary said "no additional sanction was necessary".

However, Clermont's Scotland lock Nathan Hines has been suspended for six weeks after being found guilty of stamping on Stoddart.

The Welsh side were competitive for the first 37 minutes in Clermont but Stoddart's sending off for a second yellow when the scores were 13-13 played a part in the Scarlets's defeat.

Stoddart, making just his second appearance since a 15-month injury lay off after recovering from a , received his first yellow card for a offside on the quarter-hour mark and Morgan Parra made him pay for his indiscretion by slotting over a penalty.

Easterby's men survived Stoddart's first 10 minutes in the sin bin and actually led by an even greater margin by the time he returned as Rhys Priestland converted a penalty and a drop goal.

But the match turned three minutes before the break as Stoddart saw yellow for the second time after more individual brilliance from former New Zealand wing Sitiveni Sivivatu.

Stoddart was penalised for failing to roll away after making a tackle just yards from his own line and referee Peter Fitzgibbon followed the yellow card with a red.

Easterby did say in Stoddart's defence: "It wasn't foul play.

"It was something he was unfortunate on one of them and the other one on the line was probably deserved."