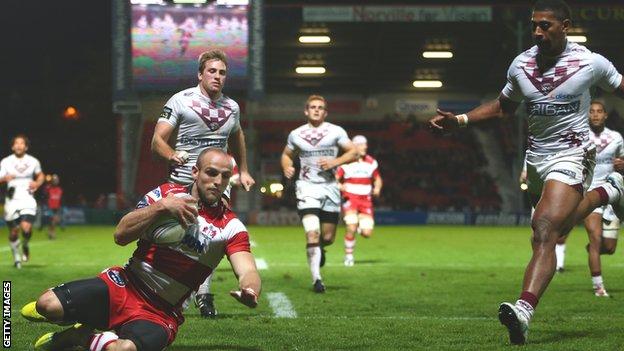 Charlie Sharples scored two tries as Gloucester made it two wins out of two in the Challenge Cup with victory over Bordeaux-Begles.

The 23-year-old wing scored twice in 11 minutes, while Will James and Billy Twelvetrees also went over as the hosts totally dominated the first half.

Twelvetrees added a conversion and a penalty but also missed four attempts at goal.

Gauthier Gibouin scored a last-minute consolation try for the visitors.

Former All Black Jimmy Cowan made his debut for Gloucester and set up Twelvetrees for his try.

The hosts, who picked up a bonus-point win, now have nine points from their opening two matches.

One blow for Gloucester came on 52 minutes when centre and former England captain Mike Tindall limped off through injury.

"We lost our way completely in the second half. I was very disappointed.

"In the first half we showed what we were about and what we can achieve, but we dropped off it.

"We are nowhere near where we need to be yet and there's room for improvement.

"But there's been eight games and we've only lost one, so it's a good return."