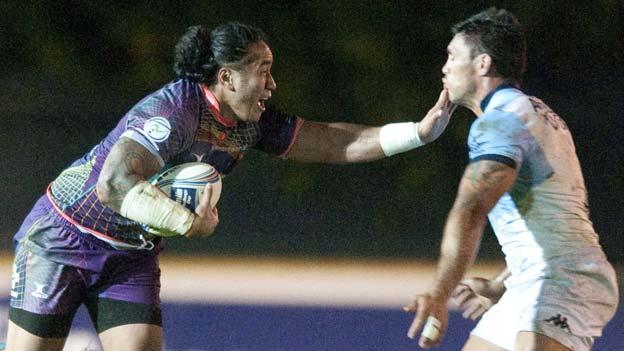 The home side opened up a deserved 16-6 lead through Tom Brown's early try and Tom Prydie's kicks at goal.

But Mark Chisholm's try minutes before halftime brought Bayonne level at the break.

A penalty apiece followed, before Benjamin Boyet landed the decisive kick to give the French side victory.

But the Dragons had their chances to win, none more so than early in the second half when Prydie fluffed a certain try.

And then only a marginal decision from the video referee denied them a try with the final move of the match after a period of almost three minutes of pressure deep in Bayonne's half in stoppage time.

It had all started so positively from the home side when they breached the Bayonne defence after only six minutes for the opening try.

Man-of-the-match Andy Tuilagi caused the damage with the first of what proved to be many midfield breaks, opening the door for Brown to race home from 20 yards.

Bayonne hit back with two Boyet penalties before Prydie capitalised on a purple patch of possession for the Dragons with three successive penalties to open a 16-6 lead.

But they failed to hold out until half-time as the advantage disappeared in three minutes at the end of the half.

Boyet ended the half with another penalty, and another shortly after the break to put the French club ahead for the first time.

Although immaculate with his boot, Prydie's hands were found wanting when wasting a certain try-scoring opportunity on 50 minutes.

The full-back created the opening himself, beating the Boyet wing Marvin O'Connor on the outside with ease to race down the left touchline.

A simple inside pass to Tuilagi would have given the centre a clear run home, but Prydie opted for the longer, more difficult pass to Toby Faletau.

The pass was too high for the Wales number eight, who knocked on and Bayonne were let off the hook.

Prydie slightly atoned with his fourth penalty to level, but Boyet's fifth and final effort at goal 11 minutes from time proved decisive.

A late flourish almost rescued the Dragons, but Tuilagi's desperate lunge and stretch for the tryline through a mass of bodies failed to convince the television match official after much deliberation.