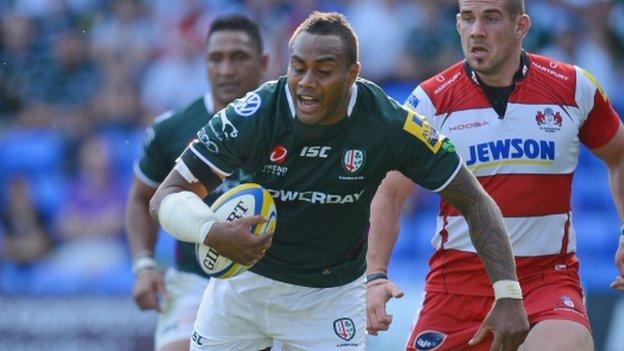 London Irish back Sailosi Tagicakibau has admitted to being "saddened" after being left out of the Samoa squad for the Autumn internationals.

Tagicakibau, 29, has 21 caps for his country but will miss this November's games against France and Wales.

But he says he is determined to win back his international place.

"I had an injury earlier in the season so I won't be involved with my country and that is really sad," he told BBC Radio Berkshire.

Tagicakibau, who signed for Irish in 2005, added: "The coaches touched base last month to tell me I wasn't selected.

"The reason was they were worried with the injury that I suffered at the start of the season to my knee.

"But at least I can concentrate on London Irish and get back to my best and let my club form get me back playing for my international team."

Tagicakibau has been playing at centre for London Irish over the past few weeks and says he is enjoying the switch from the wing.

"It's a project for Smithy [director of rugby Brian Smith] and myself playing at inside centre," he said.

"It can help improve my overall game and it will help me become a better centre and better winger in the long run.

"I won't rule out playing centre in the future, it's a new challenge and I'm always happy to help out the team."

The club face Mont de Marsan in the Amlin Challenge Cup this weekend and Tagicakibau has told his team-mates not to take them lightly after back-to-back victories.

"We've been through a tough patch and to get back to back wins is a massive confidence booster and we are really looking forward to this weekend building on the momentum," he said.

"We need to focus on this game and forget last weekend's match now. French teams are always unpredictable.