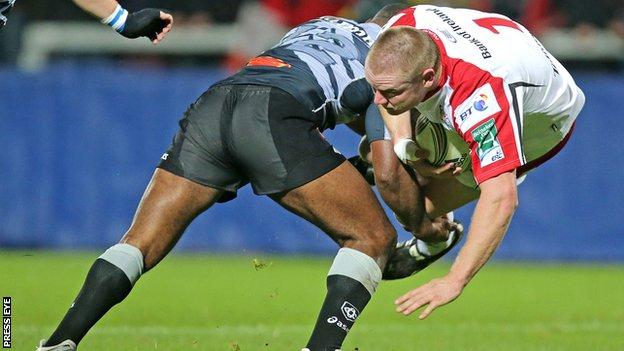 Ulster now boasts a squad depth that can challenge Leinster in the Pro12 and Heineken Cup, says Tom Court.

Leinster's ability to consistently win silverware in both competitions is based on having stiff competition for places throughout the team, and Court says Ulster are catching up.

"That's been the big revelation this year, the competitiveness in the squad.

"Everyone is under pressure, which is a good thing. That is a big factor in the squad mentality this year," said Court.

Ulster were surprise Heineken Cup finalists in 2012 but lost heavily to provincial rivals Leinster by 42-14 at Twickenham.

They recruited smartly over the summer and with local prospects like Iain Henderson, Craig Gilroy and Luke Marshall making the transition from the Academy to the senior arena.

There is now genuine competition for places, which has coincided with the province making a superb start to the season, winning six out of six games including a resounding bonus-point victory in the Heineken Cup opener against Castres last weekend.

"In previous years guys would have been guaranteed places but this year even Stevie Ferris, who is a Lions player and whatever else, I'm sure he watched last week and sees over his shoulder that Hendo (Iain Henderson) is coming along and he's thinking, 'I better not miss too many weeks or take too many weeks out'."

The battle for Ulster's number nine jersey between Ruan Pienaar and Paul Marshall is an example of how the big names at Ulster are no longer guaranteed to walk onto the starting fifteen.

Court said: "that competitiveness between players is probably ideal for a coach".

"Everyone has been challenged by Mark (Anscombe).

"The young guys who came in at the start of the season played so well and are pushing for places and the guys that are in, have to push even harder to stay there."

Despite lingering injury concerns over Ferris and Nick Williams, Ulster are in confident mood ahead of Friday night's Heineken Cup away match against Glasgow Warriors.

"The momentum has been great," added Court.

"It's a matter of trying to keep it going and that's one of the things driving the boys on - you don't want to be playing on the team that loses first."