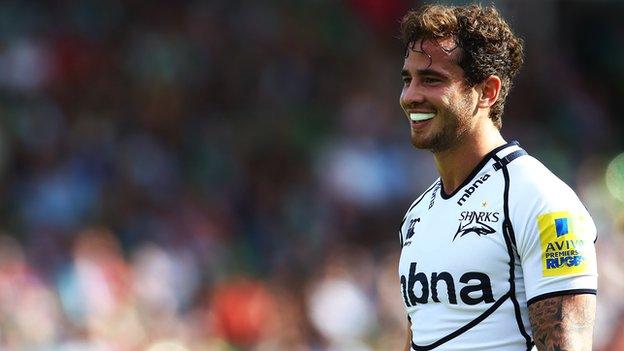 England head coach Stuart Lancaster says Danny Cipriani's hopes of a national recall depend on impressing as a regular starter for Sale.

Cipriani has not nailed down the number 10 shirt at Sale but starred in Sunday's 34-33 win over Cardiff Blues.

Cipriani's seven England caps were won in the space of just under 10 months in 2008. His last appearance was as a substitute in the 32-6 defeat by New Zealand in November 2008.

"His challenge is to start and play well for Sale. If he does that on a consistent basis he'll be considered like everyone else," Lancaster said.

Cipriani held talks with Lancaster about his England chances before his return from Australia, where he had been playing for Melbourne Rebels.

The gifted playmaker, described as "clearly the best attacking English fly-half" by former England and Lions centre Jeremy Guscott, spent two seasons in Australia after his career stalled in England.

A serious ankle injury in 2008 halted his progress and a lack of form when he returned from injury, combined with an apparently uncomfortable relationship with former England boss Martin Johnson, saw him fall away from the international scene, while off-field disciplinary problems also reared their head.

Since joining Sale in the summer Cipriani, whose tackling has also been called into question, has been battling with Nick Macleod for a place in Brian Redpath's line-up, with each player starting three Premiership matches this season.

Lancaster told BBC Radio 5 live: "I'm lucky, I coached Danny a lot before he went to Australia and he worked with me in the Saxons. When I spoke to him out in Australia he said the priority is to come back and play well in the Premiership.

"It was great that he came on and made a difference [on Sunday] and great for Sale to get that win."

Lancaster also reiterated that players based in France, such as the Toulon trio of Andrew Sheridan and brothers Steffon and Delon Armitage, are unlikely to be called into the England squad because they are unavailable for training sessions that take place outside official International Rugby Board (IRB) release windows.

"We have got a camp coming up at the end of this month and we have an agreement with the Premiership clubs to have access to the England players, but it is not under the IRB release window so we can't get the lads who are in the French clubs," said Lancaster.

"You would never say never but it is always going to be harder for players playing in France."

Number eight Nick Easter, 34, has not featured for England since Lancaster took over from Johnson, but England forwards coach Graham Rowntree insists the veteran Harlequin's impressive form has not gone unnoticed.

"He's playing well and we're well aware of his form but since this crew came together we've looked at younger players and we're quite happy with their development because we've got to look to the next World Cup," Rowntree told 5 live.

"The door's not closed for Nick and we've met him and told him that. The guys we've got there, we're very happy with."