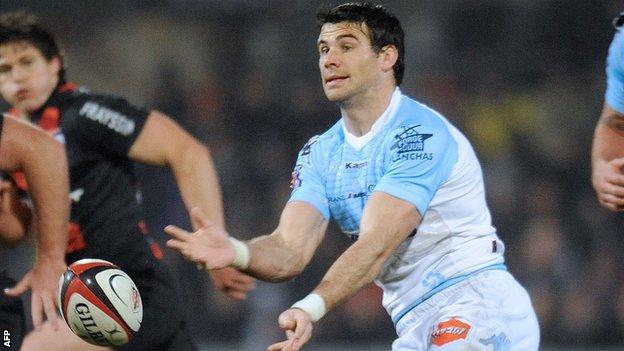 The French side face the Dragons in the second round of Amlin Cup matches on Saturday.

And former Ospreys scrum-half Phillips returns to a ground where he has previously been targeted by home fans.

"I would expect exactly the same for Mike's return to Rodney Parade," Beale said.

"I would like to think Mike will be making Bayonne aware that this is not a very easy place to come and play.

"Our fantastic support at Rodney Parade, in particularly in the Hazell Terrace, will give Mike and the rest a pretty tough time."

Our results against French teams, certainly at Rodney Parade, are pretty good

Phillips, who left the Ospreys in the summer of 2011, was recently suspended by Bayonne for off-field misbehaviour

Club president Alain Affelou had taken exception to Phillips being out late following a crushing home defeat against Toulouse.

The 30-year-old also had surgery on his finger after sustaining an injury while training with the French club.

Bayonne have had an indifferent start in France's Top 14, winning three and losing five but they crushed Mogliano 71-7 in their opening Amlin Cup match.

Phillips came on as a second half replacement in that match.

The Dragons, who are second from bottom in the Pro12, lost their opening game in the competition against Wasps last weekend.

"The result last week hasn't allowed us to get off to the start we would have liked however there's still a long way to go in this competition," Beale added.

"A result on Saturday will make things look a lot rosier on Monday morning when we come back into work.

"We can beat any team that comes to Rodney Parade

"We just need to start believing that and start going out on the pitch and really producing exactly what we work on throughout the week and transferring it to the match.

"That's probably what we've not done and we need to do it on Saturday."