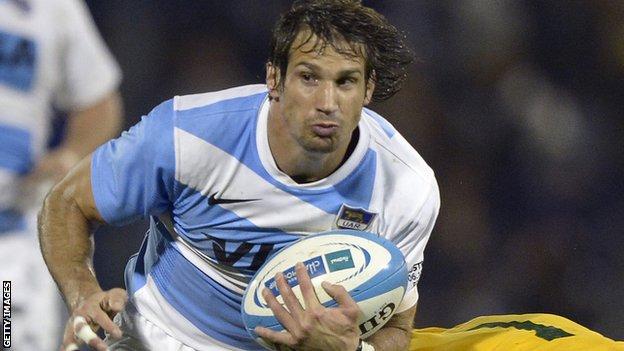 Exeter's Argentine winger Gonzalo Camacho says he expects the Pumas to continue to improve after their debut in the new Rugby Championship.

Argentina finished fourth, but drew with South Africa and on the Gold Coast.

"Those games persuaded us to keep the faith and stay on the same path we're walking down now," Camacho said.

"I think it's not going to be long until we win one of those matches," he told BBC South West Sport.

with a 100 per cent record in their six matches, but for Argentina it was a first chance to play regular high-level international rugby outside of the World Cup.

"It was amazing for the nation," said Camacho, who played in all six games and scored a try against the All Blacks.

"It's a big step forward here and hopefully we can grow not only at international rugby, but the local rugby in Argentina as well.

"It surprised me when we went to the stadium for the first game against South Africa where there were 40,000 people.

"It was pretty amazing, and to have that amount of people was surprising in Argentina and we hope it can grow more."