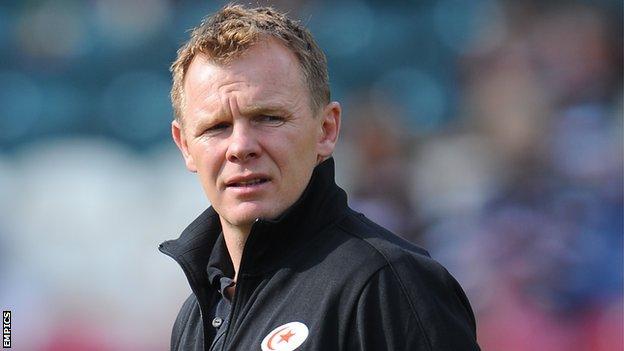 Saracens director of rugby Mark McCall has admitted it is a gamble playing their 'home' Heineken Cup tie against Racing Metro in Brussels.

The teams will meet in Saturday's Pool 1 clash at the King Baudouin Stadium.

"Of course it's a risk, but we're a club that likes to take risks," McCall told BBC Three Counties Radio.

"We think rugby can sometimes be conservative in nature - so as a club we want to push boundaries. This is another example of that."

Despite their familiarity with playing in different stadiums, McCall believes it will be difficult to foster a "home mentality" against the Parisians, as they look to follow up on last week's

"Our away record in the Premiership and Europe is very strong, so it's not an issue to the players."

The American-born 29-year-old, who has scored 110 points in his 99 Sarries games, is hoping his side can show their Heineken Cup pedigree against Racing Metro and December's double-header against former champions Munster.

"I think if we win this, we'll set a great platform to move forward in the competition," he said.

"Don't forget we've got Munster to play, who are a European powerhouse.

"Beating Racing Metro would be a good statement. Better than that would be finishing top of our group with two wins against Munster. That would be a huge statement and it's no easy feat."