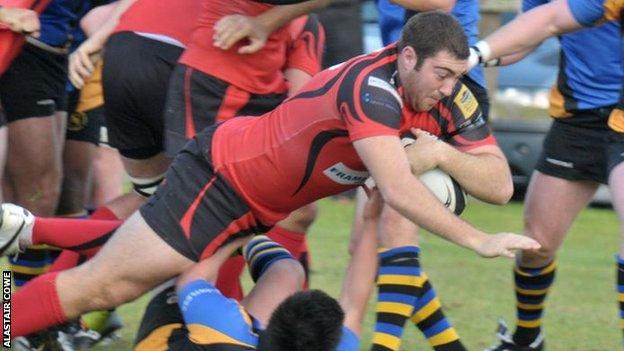 Redruth boss Adrian Edwards praised his side's second-half performance as they crushed Chinnor 44-14 at the Rec.

The four second-half tries helped the Reds to a bonus-point win which moves them third in the table.

"We had a tough away game last week and played for the full 80 minutes and today was a great second-half performance," he told BBC Cornwall.

"They did really well, it was good game and nice to get the home victory and five points."

Redruth were 17-7 up at half time thanks to two tries from Frazer Kellythorne and one from Sam Parsons before the second-half onslaught.

Tom Duncan crossed for the Reds after 51 minutes to make it 24-7 before Chinnor struck back through a converted Philip Seymour try.

But in the final 12 minutes Chris Fuca went over, Duncan got his second, Ashley Hoskins kicked a drop goal and Owen Hambly went over to seal the 44-14 win.

And Edwards was pleased with how young players such as Dean Bonds, Daniel Job and Jonathan Drew are gelling into his side.

"It's a good blend at the moment and the old boys are bringing the young ones on well," he added.