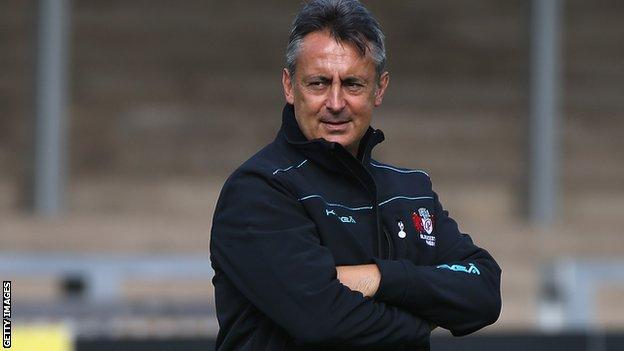 Davies, 47, left Scarlets to take over at Kingsholm in June, two months after the departure of Bryan Redpath.

Gloucester have lost just one domestic game under Davies and have a 100% record in the Amlin Challenge Cup.

"The atmosphere and morale of the team is completely different," Walkinshaw told BBC Gloucestershire.

"Potentially, if we had played some of these games last year then we could have lost them in the final 10 minutes, as we did so many times.

"We've had a few games we could have lost but we've managed to grind out a result which is testament to the team spirit we have," said Walkinshaw, who is 23 years Davies' junior.

"Nigel has had a big part to play in that and we've been very impressed by what he's done so far."

They eventually slipped down to finish ninth and failed to secure a Heineken Cup spot.

Davies, who was capped 29 times for Wales as a player, has opted to stick with the squad he inherited from Redpath and Tommaso D'Apice and Rob Cook are the only new faces to arrive during his tenure.

And with the club currently sitting fifth in the league, only three points behind leaders Northampton, the players seem to have responded well to their new leader.

"We couldn't be happier. I've spoken to board members and they seem to be as happy as the players," added Walkinshaw.