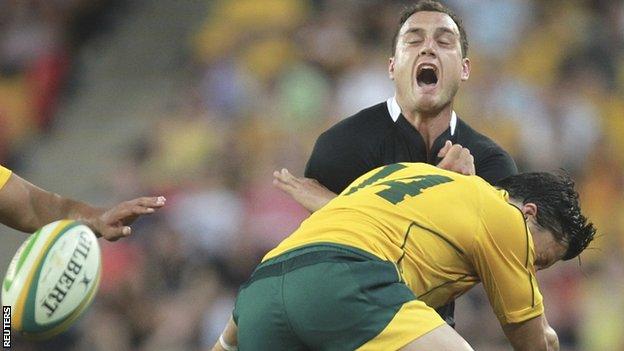 New Zealand fell inches short in their bid to equal the world record of 17 straight Test wins by a top-tier nation after an 18-18 draw with Australia.

The world champions trailed 15-6 with half-an-hour left but four consecutive Dan Carter penalties put them ahead.

Mike Harris's fifth penalty for the Wallabies levelled it after 75 minutes.

But New Zealand, opting for a scrum on their own 22 in injury time, nearly snatched victory only for Carter to miss a drop-goal with the last kick.

It was an incredible finish and the sense of disappointment and disbelief on All Blacks faces after seeing their run come to an end was evident at the final whistle.

The All Blacks had won 16 successive Tests since their final game before last year's World Cup triumph - a 25-20 loss to Australia, also in Brisbane - and were looking to equal the joint record of their New Zealand predecessors from 1965-1969, and South Africa from 1997-1998.

Lithuania hold the official International Rugby Board record of 18 successive wins from 2006-2010, but none was against a Tier One or Two nation.

"We're really disappointed. But to play as poorly as we did and still manage to show the character and tenacity to get the draw was pleasing

For the first 50 minutes at the Suncorp Stadium New Zealand were way below their usual lofty standards, a string of handling errors and indiscipline at the breakdown allowing Harris - with four penalties before the interval - and Kurtley Beale, with a long-range effort in the 51st minute, to give the Wallabies a nine-point advantage.

Even the great Richie McCaw momentarily lost his composure - understandably perhaps - after Wallaby flanker Scott Higginbotham appeared to knee him in the face as he lay on the ground. When the All Blacks captain took exception, Higginbotham then aimed his head in the direction of McCaw's, an act that may interest the citing commissioner.

"Another cheap shot on the bloke, he seems to get it every week, and everyone seems to miss it," said All Blacks coach Steve Hansen.

But the world champions showed their character to turn the match around, aided by the sin-binning of Wallabies flanker Michael Hooper for a late hit on scrum-half Aaron Smith.

New Zealand failed to score a try for the first time in 105 Tests, a run stretching back to a 23-18 loss to Australia in August 2004

Back to a full complement of 15 after the yellow card issued to prop Tony Woodcock in the last minute before half-time, the All Blacks chipped away with four Carter penalties between the 52nd and 71st minutes.

Nerves appeared to afflict the injury-ravaged Wallabies, losing a line-out near their own line before Adam Ashley-Cooper dropped a high kick from replacement Aaron Cruden on his own 22.

When the ball rebounded to Nick Phipps in an offside position, Carter put the All Backs ahead for the first time since the 11th minute.

But Australia responded and after Harris had levelled the scores with five minutes left, it was the hosts who threatened to win the game, camped in the All Blacks half but failing to create a position for a drop-goal attempt.

Instead the All Blacks, awarded a penalty on their own 22 two minutes into injury time, opted for a scrum and thrillingly worked their way up to the Australia 22 with some superb handling.

But when the opportunity knocked to make history at the last, Carter - the record points scorer in Test rugby - pulled his snatched drop-goal attempt narrowly wide of the right-hand post.

Saturday's match was the third in this year's Bledisloe Cup series between the trans-Tasman rivals, but New Zealand had already retained the trophy after home and away wins in the recent Rugby Championship.