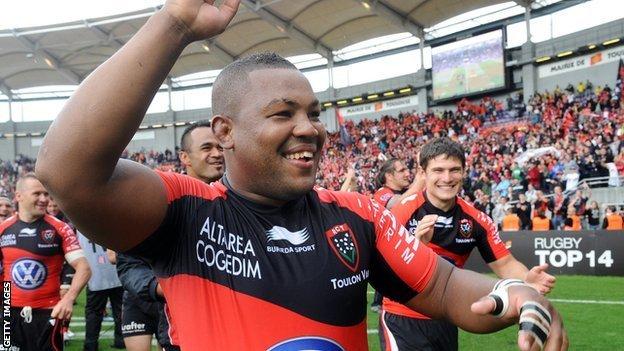 Lancaster is reluctant to select France-based players who are not always available for training camps.

But World Cup winner Wilkinson, who retired from the international game in 2011, thinks Armitage deserves a spot.

"The job that he does is world class and when you are world class you deserve to be in a squad," he said.

"He is a great player. He is in a league where guys like that are gold dust - guys that can change the passage of the game in a couple of actions and turn difficult defence into good attacking ball.

"Any team needs it and we are lucky to have him on ours. There are a load of good ones around and I think he is one of the best."

The most recent of Armitage's five Test appearances for England came as a replacement in the 17-12 win in Italy in February 2010.

His switch limited his chances of adding to his collection of international caps with the Rugby Football Union having stated a policy of only selecting overseas players in "exceptional circumstances".

Lancaster has said that an agreement with the Premiership clubs that allows England access to players for periods outside of the International Rugby Board's release windows places those based overseas at a big disadvantage.

"You would never say never but it is always going to be harder for players playing in France," he told BBC Radio 5 live.

But Toulon's former France coach Bernard Laporte has said that England cannot afford to ignore Armitage, who scored his side's only try and was named as the best player in the Top 14 players last season by French newspaper Midi Olympique.

Armitage himself, who last spoke to Lancaster before the summer tour to South Africa, says that while he would welcome a return to the England squad, he is concentrating on his club rugby.

"I will never say no to England; it is always an honour to play for your country," he said.

"I keep my head down and keep trying to get wins out here for Toulon and that is the best way to show people that you have what it takes.

With Sale flanker Hendre Fourie plagued by a shoulder injury, Armitage is now seen by many as England's best ball-winning flanker.