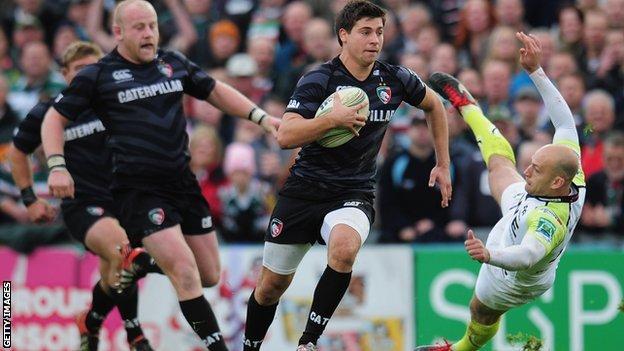 England and Leicester scrum-half Ben Youngs says he has been surprised by the speed of his recovery following shoulder surgery in the summer.

Youngs only returned at the start of the month but he starred in Leicester's Heineken Cup win over Osprey on Sunday.

And he appears to be pushing the in-form Danny Care for a starting spot for England's autumn internationals.

"I have probably got back sooner than I thought. The only aim for me was about playing," he told BBC Radio Leicester.

"It's great to be back out there. The autumn is around the corner but I have to back it up again next week and keep progressing.

"It's healthy competition and obviously Danny is a good player.

"It's a big year this year and I am working very hard. I am in a great club and a great environment so it's just one week at a time.

Youngs said the manner of the bonus-point win over Ospreys - a result which was crucial given their opening-day defeat against Toulouse - was particularly pleasing.

"The crowd were fantastic. And in the last five minutes, if anything, they got us that bonus point because a lot of guys were very tired and Osprey are a fantastic side.

"We are delighted. We would have taken the win but five points is an absolute bonus.

"The boys have to dig in but when you hear that roar and how the fans are it's brilliant.

"It's always a privilege playing in front of a people like that.

"Areas against Toulouse we got right for 35 minutes, but then we try to offload in the pouring rain and they score. That was probably a game swinger.

"Our discipline was poor last week and perhaps we got a bit timid playing in Toulouse and we should have taken it to them.

"But this a good win and we are now back in the pool. Toulouse have to play Ospreys back to back. We have Treviso back to back and we will see where we are then."