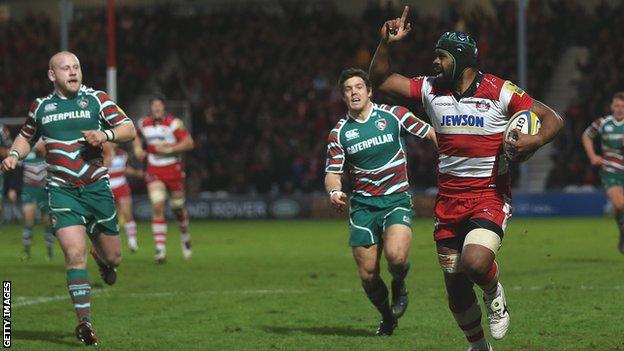 Gloucester held off a late Leicester onslaught for a fifth Premiership win in a tumultuous clash at Kingsholm.

Tigers won a penalty try, with the hosts down to 13, but despite sustained pressure could not break through.

Leicester lost England scrum-half Ben Youngs to a tight hamstring before the game got under way and made an inauspicious start.

Burns, who missed out on being named in England's squad for the autumn internationals in midweek, set Kingsholm alight inside the first minute when his delicately executed grubber sat up perfectly for Sharples.

The Gloucester fly-half, who ended with a 17-point haul, then threaded his touchline conversion for a 7-0 lead with Leicester yet to touch the ball.

Flood posted three from the tee for Tigers, with Burns responding in kind, before New Zealander Hamilton defied his compatriot Jimmy Cowan to reach for the line.

The try went unconverted but the visitors' line-out was malfunctioning owing to poor throwing by Tom Youngs who, following injury to Dylan Hartley at Northampton, is now in line to start for England next month.

But the hooker's errors were more than matched by some wayward kicking out of hand on both sides.

Burns provided further evidence England were wrong to overlook him on 20 minutes when he chipped over the top and gathered his own kick to canter under the posts.

The conversion was a formality and Burns nearly turned provider for Sharples again when his quick-thinking penalty in behind Leicester was gathered by the winger before Anthony Allen's covering tackle.

Flood rounded off a frantic half with another three points to make it 17-11 on the whistle.

Burns was on target with an early second-half penalty, after Steve Mafi went high on Simpson-Daniel, but missed a straightforward shot after Flood had pulled three back for Leicester.

The stand-off's blushes were spared a minute later by Simpson-Daniel when he ghosted his way through broken-field defence to put Qera clear.

The successful conversion made it 27-14 but Tigers put their trust in Youngs, sending a series of penalties to the corner, and it proved a crucial phase.

The Cherry and Whites were reduced to 13 when Cowan was sin-binned at a maul and Rob Cook saw yellow after he deliberately pushed Flood's cross-kick out with Nikki Goneva in a scoring position.

With Rob Savage and Sione Kalamafoni forced off through injury Tigers overpowered Gloucester's scrum and JP Doyle awarded Leicester a penalty try on the hour.

The hosts' line-out then deserted them and even when back to a full compliment their scrum was porous.

But, under immense pressure, Gloucester seized the momentum - taking a decisive scrum against the head - and they held firm for a famous win under the Kingsholm lights.

"I'm delighted with the way the players have evolved over the last six or seven weeks. To put a performance in like that, in many ways showed what we're capable of.

"In the first half, I thought we scored some great tries and played some good rugby, and if we'd been more accurate we could have scored a few more.

"The second half showed we had great determination and were playing for the shirt, the supporters and playing for each other.

"When you're down to 13 men for 10 minutes against one of the most consistently good teams in this league and can still come away with a win, that says something special about these players."

"It was a great game of rugby.

"We got ourselves back into it and put them under huge pressure, but I don't know how many times you have to get penalised two metres from your line before people go to the sin-bin, which was frustrating.

"But we made mistakes ourselves at times and it was a classic game of rugby. Fair play to Gloucester, they played some good stuff.

"The effort and commitment from our lads was second to none today. Sometimes you do not get the reward."