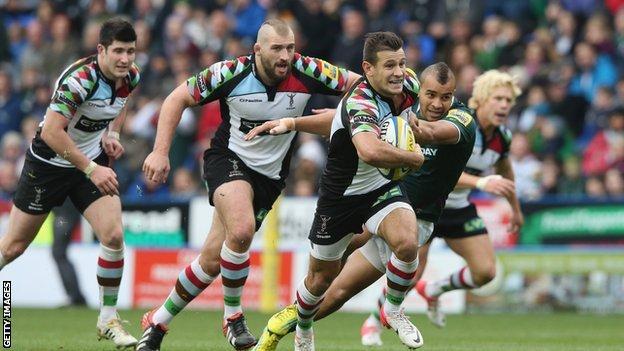 Botica and Ian Humphreys continued their shootout after the break as Tom Williams got Quins back out in front.

Casson's try, which he looked to have knocked on, was given by the video ref.

The result brings to an end Harlequins' run of two defeats in the Premiership and leaves Irish in 11th place with just two wins.

A frenetic opening quarter was laden with errors and scores in equal measure as the two sides massed a collective 23 points.

Two early Botica penalties got Quins on their way before Humphreys' off-target shot at goal led to Armitage's score on 10 minutes.

Ugo Moye's incomplete touchfinder was shifted right and, with Mike Brown down injured, Botica's clearance on the deadball line was charged down by Jamie Gibson.

The ball spooned into the arms of the waiting Armitage who touched down.

Humphreys added the extras but then had a hand in a try at the other end minutes later.

The Exiles man spilled Anthony Watson's pass and Care was on hand to intercept and race away under the posts for an easy seven pointer.

Botica extended Quins' lead by three points only for Humphreys land six points and rein the visitors back.

Brown saw yellow with three minutes of the first half remaining for knocking the ball down as Jonathan Joseph, who was later forced from the field with an ankle injury, tried to off-load.

But the resulting penalty fell short and the sides headed to the changing rooms all square.

Darren Allinson came on for Exiles scrum-half Tomas O'Leary and Maurie Fa'asavalu stayed on for Quins' skipper Chris Robshaw, who picked up a nasty eye injury before the break.

Quins saw out the remainder of Brown's absence without conceding and Botica re-established their lead on his return.

Humphreys equalised again but when Irish knocked on at the restart Quins scored from the centre-field scrum.

The New Zealander converted from the touchline but Humphreys twice held his nerve from the tee to make it a one point game with 15 minutes to go.

Botica missed the chance to extend Quins advantage, and his opposite number nudged Exiles ahead but then, with less than a minute to go, came the decisive score.

Monye's pass inside as he was tackled into touch fell through Cassons' hands and the ball moved forward before he touched it down.

TMO Graham Hughes was asked to review the play, which showed that the ball hand got backwards off the centre's hand only to hit his knee, pushing the ball over the line before it was grounded.

"I think if you watch it [Casson's try] in real time it doesn't look like a try, it's a great piece of covering work by Armitage.

"But by the letter of the law it's a try so I think it was a good decision and it's why we have the TMO system."

"We know that at the end of the season you look back and you have games like this. It's a massive four points for us to come away with because Irish played well and it's a tough place to come."

"The guy who had the responsibility made his call and while I don't agree with it there might be some who do.

"The key thing for us is to take the spotlight off the incident at the end and focus elsewhere - we're a good team.

"We played well against the champions of England and I think we deserved the win, but at the same time if you ask yourself, 'Could that game have gone either way?', you have to say, 'Yes, it probably could have'."