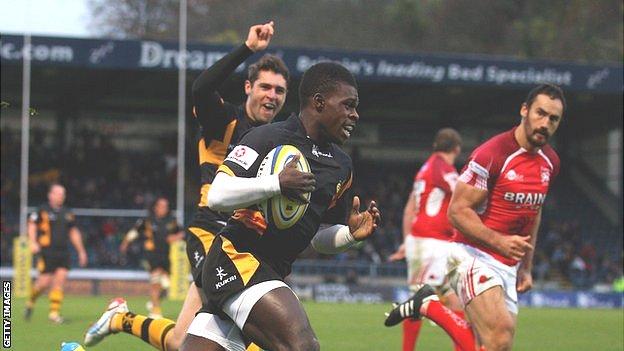 London Wasps claimed a try bonus point as they beat London Welsh in the two clubs' first ever league meeting.

Two tries apiece from Christian Wade and Tom Varndell lay the foundations for the victory in a match in which Wasps never fell behind.

However second-half tries from Phil Mackenzie and Franck Montanella kept the Exiles in contention.

Welsh looked to have secured a losing bonus but were denied by a late penalty from Lee Thomas.

It was the first competitive meeting between the two sides since a John Player Cup tie in March 1979, which was won by Wasps.

Both sides were forced into late changes ahead of kick-off. James Haskell missed out through illness for Wasps, with his place at openside flanker being taken by Jonathan Poff.

Wasps opened the scoring in the third minute when full-back Hugo Southwell fed winger Wade, who crossed over in the corner.

The first half was largely a scrappy affair but Wasps went in 16-6 ahead after centre Lee Thomas sent over a drop-goal on the stroke of half time.

After the break Wasps pulled further ahead when another slick move saw Robinson feed Wade again, and the 21-year-old sped away from the Welsh defence to touch down in the corner.

Welsh winger Mackenzie reduced the arrears when prop Paulica Ion set up the Canada international following a move which was started by the backs.

Varndell then bagged his second, and his sixth of the season, after good work from Robinson but Welsh hit back when Montanella was propelled over from a five-metre catch and drive.

Gordon Ross's penalty three minutes from time looked to have salvaged a point for the Exiles but Lee Thomas's converted a penalty in the dying moments took it away.

It guaranteed a fourth consecutive victory in all competitions for Wasps and moves them up to seventh in the table.

However the hosts lost Joe Simpson to injury when the scrum-half was taken off on a stretcher at half-time.

"Our wings were the major difference between the two sides. Christian was outstanding and Tom wasn't far behind.

"Christian must be in the frame for England. He is in the Saxons set-up but England are blessed with some high-quality wings and he must carry on the way he is playing to continue to impress them.

"There are a number of things to work on. We struggled up front especially in the second half and our ball retention was very poor.

"We need to play with more composure as we squandered three or four good chances."

"We're all very disappointed in the changing rooms. We worked really hard to come back into the game and a small error has cost us a bonus point.

"It would have been great to come away with a point after things didn't go well for us in the first half.

"There was a lot of good in our game but we need to complement that with individual responsibility. The players need to apply the things we speak about during the week in the game.

"If we can start doing that then it won't be by accident that results come our way."