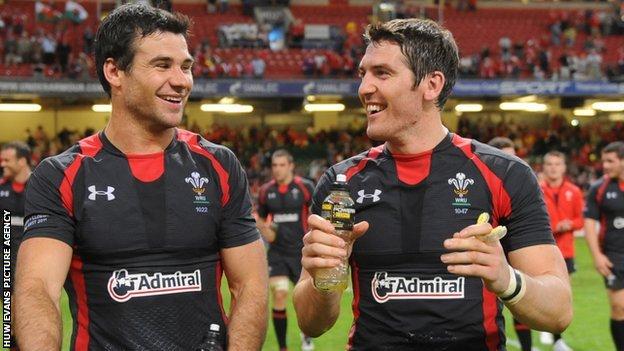 Wales are taking a "softly, softly" approach to talks over the availability of a quartet of France-based players ahead of their autumn Tests.

And the four could also be absent when Wales face Australia on 1 December as it falls outside the Test window.

"Those players are unlikely to be involved in the Australia game," said coach Robert Howley.

Following his decision to join Perpignan from Newport Gwent Dragons, lock Charteris stated he had negotiated a release clause allowing him to be involved in all Wales' playing and training commitments.

However, Howley says there are on-going discussions, involving British and Irish Lions coach Warren Gatland, between Wales and the players' clubs - Perpignan [Hook and Charteris], Toulon [Jenkins] and Bayonne [Phillips].

New Zealander Gatland takes charge of two of Wales' games - the clash against the Wallabies and the 24 November encounter with world champions New Zealand - with Howley's initial focus on the 10 November match against Argentina and the Samoa date that follows six days later.

The Australia clash falls outside the International Rugby Board fixture window and French and English clubs are not obliged to release their players.

Toulon prop Jenkins hopes Howley and Gatland's efforts can secure his release for the clash against the Wallabies.

"We will wait and see, fingers crossed," said Jenkins.

Howley said: "Warren and myself went over to France and had five or six days with the various coaching teams in Bayonne, Toulon and Perpignan.

"There are ongoing discussions with those players based in France.

"At this moment in time, those players are unlikely to be involved in the Australia game.

"But it is important we look at every individual case and why that player is going to France.

"If they are being head-hunted, then surely between the agent, the player and the club president there can be some sort of arrangement or discussion that the player becomes available for some preparation time or a game outside the IRB Test window.

"It was important for us to go to France. If you don't try, I think you are always going to have a negative answer.

"We wanted to open discussions and try to create a relationship.

"Ideally, we want everyone to stay in Wales, but we understand in terms of supply and demand that is not going to happen - from a players' perspective and from a region's perspective - and we just have to get on with it and manage our players the best we can.

"We need to find a Welsh solution. At this moment in time there is a lot of good talk going on between the regions and the Welsh Rugby Union, and I am sure at some stage a solution will be found.

"It is important the right solution is found. It's not going to happen overnight.

"It's softly, softly, and communications are in place, and I am sure a solution will be in place shortly. It is going to take time."

"Jamie's position is a little bit different compared to every other player who might decide to go over to France. I don't think it is a financial decision Jamie has to make.

"He is going to be a doctor, and Jamie might buck the trend in deciding to go for reasons other than finance. That is Jamie's decision."