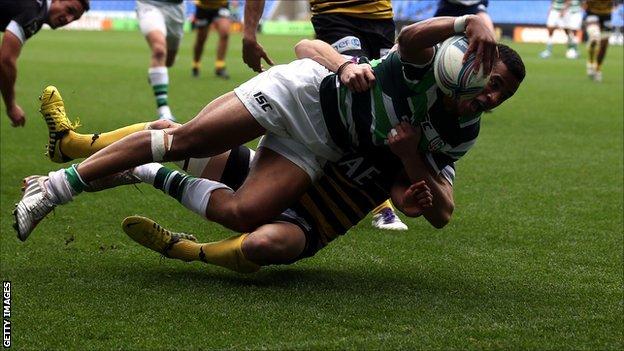 London Irish full back Anthony Watson has said Saturday's 69-26 victory over Mont de Marsan in the Amlin Challenge Cup was extra special for him as he scored his first tries for the club.

Watson, 18, scored twice in their victory over the French side.

"It was a massively enjoyable game and it was a great game to play in," Watson told BBC Radio Berkshire.

"It was great to get some tries, it was my first one so it's a very special day for me."

I was pretty happy with my personal performance

Watson, who last year became the youngest London Irish player to feature in the professional era at the age of 17, says he now intends to build on the weekend and continue to improve at the Exiles under the guidance of new director of rugby Brian Smith.

"I was pretty happy with my personal performance but to be honest with you I think I reaped the rewards of some great team play," he added.

"I just aim to keep my head down and work as hard as possible.

He added: "Brian is a great coach and likes to play free flowing rugby and he has helped me out massively."