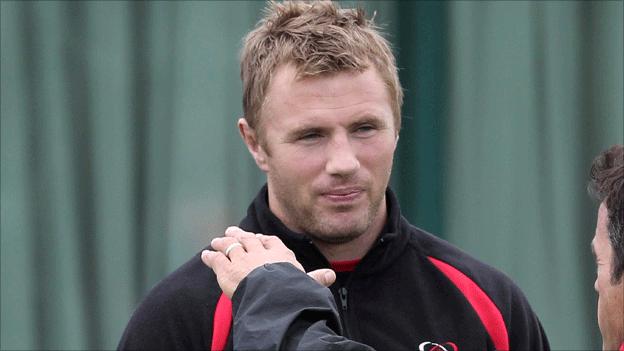 Ulster number eight Roger Wilson has been included in the preliminary squad for Friday night's Pro12 game against the Dragons at Rodney Parade.

Wilson looks set for his first taste of competitive first-team action since suffering a hamstring tear playing for Northampton at the end of last season.

The Dragons hope to choose from the squad that lost to Bayonne in the Amlin Challenge Cup.

Ulster back-row Wilson returned to Ulster in the summer and has impressed in recent outings for the Ravens.

Stephen Ferris and Declan Fitzpatrick are back in the panel after injuries.

Fitzpatrick had suffered a recurrence of a medial ligament injury prior to the match with Connacht earlier this month but has undertaken full training over the past weeks and will be hopeful of getting much needed game time.

Ferris has been included after missing the Heineken Cup wins over Castres and Glasgow with a back injury, while fly-half Niall O'Connor has also been added to the panel.

Johann Muller has been ruled out for eight weeks after sustaining a thumb injury against Glasgow.

Ireland international back row Chris Henry will captain the side in Muller's absence.

Ulster currently top the Pro12 table, and still possess a 100% winning record in all competitions this season.

The Ulstermen have won five of their last six fixtures with Welsh regions and have been victorious on their two visits to Wales so far this campaign.

Dragons' only win in their last seven matches in all competitions was a 32-12 at home to Edinburgh in round five of the Pro12.

The Welsh outfit will look to improve on a disappointing record against Irish provinces, winning just one of their last 14 encounters.

That success did come over Ulster though, just over 12 months ago when they registered a 22-9 win at Rodney Parade.

The Ulstermen have managed only one victory at Rodney Parade since 2006.