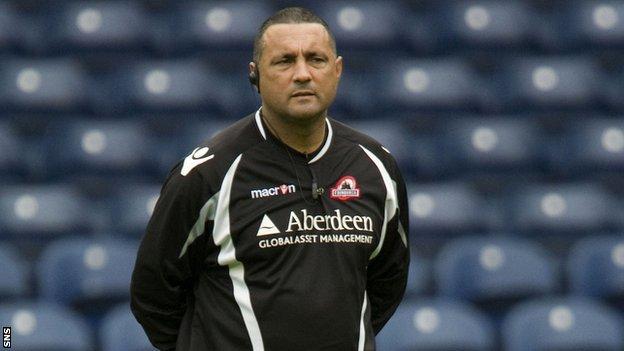 Edinburgh duo Nick de Luca and Sean Cox say the players are completely behind coach Michael Bradley despite the club's poor start to the season.

The pair believe the fault, highlighted by two heavy Heineken Cup defeats, rests with the players.

The players have got massive respect for the coaching staff

De Luca told BBC Scotland: "Individually we're not performing, which is more easily addressed than if it were management issues."

And Cox added: "It's up to the players to put it right."

In the RaboDirect Pro12, Edinburgh are ninth after four defeats from their opening six fixtures, while Scottish rivals Glasgow Warriors are third.

Centre De Luca and lock Cox insist Bradley and his coaching staff provide all the information the players need going into games.

"I don't think it's an issue with the information or the training or the coaching we're getting," said De Luca, who feels Friday's home Pro12 match against Scarlets would have been a "must-win" game regardless of the Heineken Cup results.

"There is no quick answer. We've gone through the games and had a lot of meetings and soul searching and hopefully you will see what we are going to do on Friday night.

"It's been a devastating couple of weeks for us. We can't forget it; it's now part of the club's history and in our individual history and we need to use that going forward, address the problems, of which there are currently many, and getting a result in the Rabo is all the more important."

Cox revealed there is "a definite guilt" in the squad.

"We get paid to win rugby matches and at the minute we are not doing that," he said as he promoted an initiative aimed at boosting the atmosphere at Murrayfield on Friday.

"The boys are fronting up; it's just we are not doing the simple things you need to be able to do and one of those things is to keep hold of the ball.

"The players are well aware it's their fault that things aren't going well. It's the players who take to the field and it's the players that aren't doing the simple things.