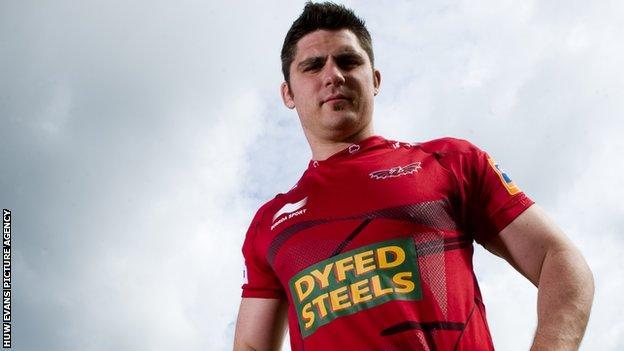 Scarlets captain Rob McCusker says he would be prepared to switch to flanker for Wales' Autumn Test series.

The 26-year-old has been included in the 35-man Wales squad as flanker Dan Lydiate is out with an ankle injury.

McCusker has featured as a number eight for his region this season, but is prepared to play blindside flanker.

"I've played most of my rugby at six and obviously learning on the job at eight. I don't mind, I'll have a crack at both," McCusker said.

"There's definitely a lot of options, but we're all there to give the selection committee some headaches."

McCusker's move to the middle of the Scarlets back-row came in the wake of Ben Morgan's move from Parc Y Scarlets to Gloucester ahead of this season.

Coach Simon Easterby also has two other versatile back-rowers in Josh Turnbull and Aaron Shingler at his disposal.

Turnbull and Shingler have also done open-side and second-row duty for the Scarlets, and join McCusker in Wales' squad for autumn Tests against Argentina, Samoa, New Zealand and Australia.

McCusker made his full international debut as a replacement in the 31-34 loss to South Africa at the Millennium Stadium in June 2010.

The North Walian has won four caps and now hopes to establish himself in the Wales squad.

"I've been out of [Wales] action for a while. I haven't been involved for what seems like a long time," added the Wrexham-born player.

"Hopefully everyone will have a fresh start and I can impress."

McCusker is one of 11 Scarlets players included in the Wales squad.

Wales will spend a week's training camp in Spala, Poland where they spent time prior to the 2011 Rugby World Cup in New Zealand.

And McCusker says the preparations in Poland, which will include cryotherapy sessions, will stand them in good stead ahead of the Test matches.

"We saw how the guys performed in the World Cup and I think a lot of that was down to the preparation they did in Poland.

"It gives a new dimension to the conditioning side and hopefully we can pull away from teams."