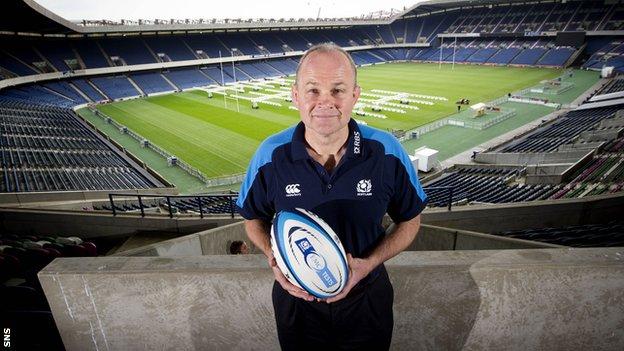 Andy Robinson has named seven uncapped players in his 34-man Scotland squad for the autumn Test against New Zealand.

Robinson described the All Blacks as "formidable opponents".

Saracens flanker Brown was in line to skipper Scotland during the Six Nations but suffered a fractured ankle, with Edinburgh hooker Ross Ford handed the armband.

An announcement on the captaincy will be made next week.

Scotland, ranked ninth in the world, have never beaten New Zealand but a strong series of results would improve their hopes for the 2015 Rugby World Cup - with the draw taking place in early December.

"It's always an exciting time when the Scotland squad comes together ahead of the first Test match of the season," Robinson said.

"It's some four months since Scotland last played an international, so when the squad reconvenes there will be an element of renewing acquaintances and reigniting the spark and spirit that was such a key part of our success on our summer tour [to the Southern Hemisphere].

"New Zealand are formidable opponents. They do the basics exceptionally well and play with a pace and ruthlessness. It's no coincidence that they are the best team in the world.

"We must look to build on the physical commitment of our players against Australia, Fiji and Samoa."

Scotland last met New Zealand in 2010, buoyed by wins in Ireland and Argentina, only for the All Blacks to ease to a crushing 49-3 victory.

On the challenge of facing the World champions, Robinson added: "It's a great opportunity for players to really test themselves and for us to be clear on where we are.

"For us it's about having a belief about what we're trying to do, the roles and everybody being clear in their roles going into the game, understanding how we can put New Zealand under pressure and putting in an 80-minute performance."

Scotland are without a number of players through injury, including backs Chris Cusiter, Joe Ansbro, Rory Lamont, Graeme Morrison and Nikki Walker.

Alasdair Dickinson, Ed Kalman and Moray Low are among the sidelined forwards.