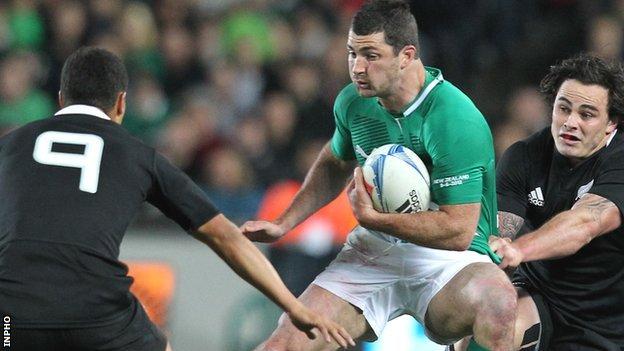 Ireland full-back Rob Kearney has been ruled out of the autumn internationals against South Africa, Fiji and Argentina because of a back injury.

Kearney requires surgery and will be out for about about 10 weeks.

The former international's arrival will allow Les Kiss to lead the attack shape for the team, as well as continuing to coach the backline.

Foley will remain working with Munster outside of the international window.

Ulster scrum-half Paul Marshall is a surprise absentee after his impressive performances this season with Eoin Reddan and Conor Murray included.

With Kearney set to undergo surgery on Thursday, Keith Earls looks to be the obvious contender for full-back although Ulster's Tommy Bowe could be another option.

There are world ranking points on offer, so the underlying challenge for us is to work towards retaining and improving our ranking position ahead of the Rugby World Cup pool draw

Leinster and Ulster both supply 10 players with Munster's having a nine-strong representation and Connacht's John Muldoon and Mike McCarthy also included.

Irish coach Declan Kidney said: "We have three incredibly competitive games ahead of us in November and while there have been quite a few injuries and niggles in the early part of the season, it has opened up opportunities for other players to step into the squad.

"There are world ranking points on offer, so the underlying challenge for us is to work towards retaining and improving our ranking position ahead of the Rugby World Cup pool draw [which will take place in early December].

"While that is the end goal, our focus will be getting our preparations right to match the intensity of international games.

"I'm pleased that Anthony has taken up the offer of working with the squad to assist during this vital period in November.

"His previous experience of working with the team during the last RBS 6 Nations championship was important, but his own abilities and experience were central to bringing him on board."

Ireland start against South Africa on 10 November at the Aviva Stadium, followed by a Thomond Park clash with Fiji a week later and finishing against Argentina in Dublin on 24 November.