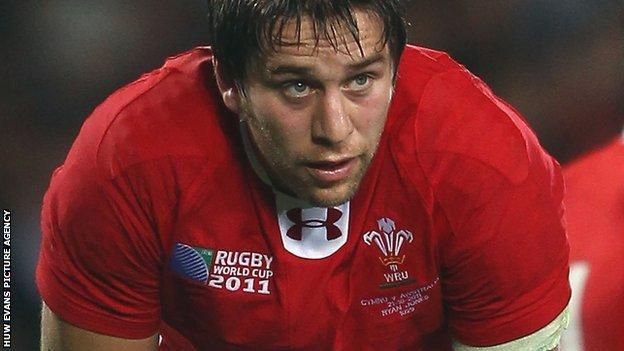 Ryan Jones has been ruled out of Wales' opening autumn international clash with Argentina at the Millennium Stadium on Saturday with a shoulder injury.

But the Ospreys back-rower is expected to recover in time for the visit of Samoa on 16 November.

Jones returned home from Wales training in Poland to have a scan on the shoulder.

The Wales medical staff have decided Jones needs to rest the injury in order to fully recover.

Jones picked up the injury before flying out to Spala for the Wales squad's training camp ahead of the autumn internationals.

"We took the decision out in Poland, we were aware Ryan had a niggle with his shoulder coming out to Poland so we thought it would be wise to get in there early and investigate if it was anything serious," said Wales assistant coach Robin McBryde.

"Happily enough that isn't the case, but it is a case of doing quite a bit of rehab work for the remainder of this week in order for him to be fit for next week's match against Samoa, which is positive news."

Wales are already without key flanker Dan Lydiate for the series against Argentina, Samoa, New Zealand and Australia.

Jones did not take part in any contact sessions in Poland, with his involvement limited to exercises in the swimming pool.

With Six Nations man-of-the-tournament Lydiate already ruled out with a broken ankle, Jones was likely to be first choice on the blind-side for the autumn series.

The Wales team management, who are due to name their team to face the Pumas on Tuesday at 13:00 GMT, have so far not called up any back-row cover.

Wales already have front-row problems with tight-head Adam Jones ruled out after suffering a recurrence of a knee injury in Ospreys' Heineken Cup defeat away to Leicester.

His absence may give Ospreys colleague Aaron Jarvis a chance to make his Wales debut while teenage Scarlets prop Samson Lee has been called up as cover.

Blues youngster Scott Andrews is the other specialist alternative.

Bath prop Paul James, however, could move across from loose-head but Wales under-20 international Lee has won a call after just seven regional appearances for the Scarlets.

Toulon's Gethin Jenkins has also played at tight-head, but is acknowledged as a specialist on the other side of the scrum.

A Wales statement said Adam Jones will not play again for anything between six and 10 weeks, which could rule him out until the new year.

"It's a massive loss - a real bad blow for Wales and their chances in the autumn," he said.

"If you had one player you wouldn't want to have injured at the moment for Wales it would be Adam Jones.

"It's the same with any team and any country. Your tight-head prop is so valuable.

"There's a lot of experience missed in Adam and don't forget, we need more than two tight-head props.

"We've got four big games coming up. Paul James has played on the tight-head. Surely that's got to be a consideration."

Wales caretaker coach Rob Howley has named a 35-man Wales squad for the series that starts against the Pumas, before Wales face Samoa, New Zealand and Australia.