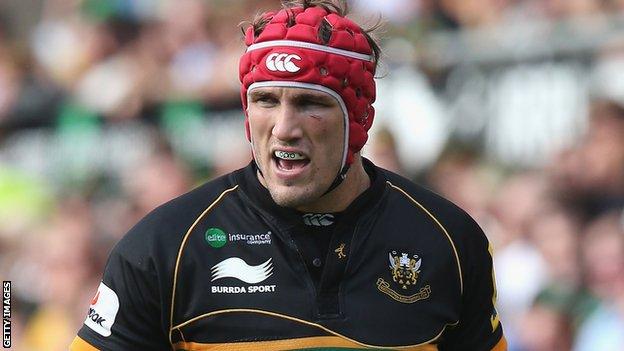 Northampton Saints lock Christian Day is hoping to return from an ankle injury by the time the club are depleted by the autumn internationals.

The 29-year-old was injured last month but could return when Courtney Lawes is expected to be playing for England.

Day told BBC Radio Northampton: "Courtney is likely to go away with England and there'll be a big hole in the second row that needs to be filled.

"It's crucial I'm back for that, but I want to be back as soon as possible."

Day feared the worst when he was carried from the field on a stretcher against Wasps.

"It felt bad at the time and it seemed pretty serious," he said. "Luckily, there's a bit of damage in there but I'm out of my protective boot this week and moving around a bit more.

"It's how it reacts to that, and if it's stable, then I can get back to playing rugby. It'll hopefully be sooner than another month."

Despite their injuries at the start of the season, forwards coach Dorian West expects England to call on Lawes and Tom Wood in their upcoming matches against Fiji, Australia, South Africa and New Zealand.

"There's every chance [we will lose them]," said West.

"They're playing well, they're in the England squad and they pick their team from that. You know you've got players in there and there's a fair chance you're going to lose them.

"That's something we're quite prepared for."