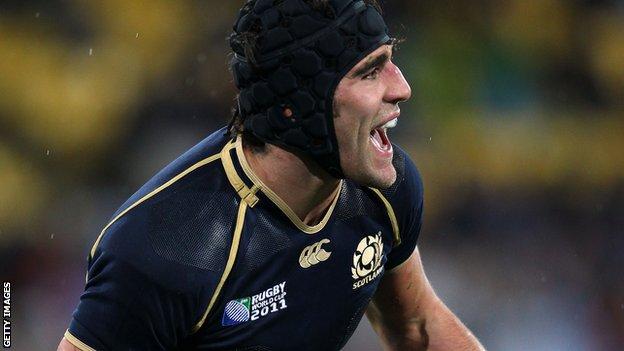 Head coach Andy Robinson is remaining tight-lipped on who will captain Scotland for the autumn Test series.

An announcement on his choice will be made next week but Robinson is happy with the number of leaders he has.

Saracens flanker Kelly Brown was due to skipper the side before injury ruled him out of this year's Six Nations.

With Brown returning to the squad, Robinson must now decide on whether to stick with Edinburgh hooker Ross Ford or make a change.

Ford lost all five matches in a hugely disappointing Six Nations for Scotland but led the team to summer wins in Australia, Fiji and Samoa.

"I think he (Ford) has done very well as a leader and captaining the team," explained Robinson.

"He's a quality player and a quality person and I'm delighted to see the way that he captained the side.

"We've got Kelly coming into the squad, which is great. I have real belief in what he's about as a leader."

With November matches against New Zealand, South Africa and Tonga on the horizon, Robinson named a 34-man squad featuring seven uncapped players for next week's training camp in St Andrews.

"I have a number of leaders," added the head coach. "Jim Hamilton is captaining Gloucester, we have Al Kellock at Glasgow and Greig Laidlaw at Edinburgh.

"Mike Blair and Rory Lawson have captained Scotland as well.

"Ford and Brown were named as leaders before the Six Nations, so we have quality in that department.

"But it's not just about the captain, it's how leadership responsibilities are shared throughout the group.

"I think every player has a role to lead on their own performance.

"The captaincy is big for people outside the team but for us, he's just another player."