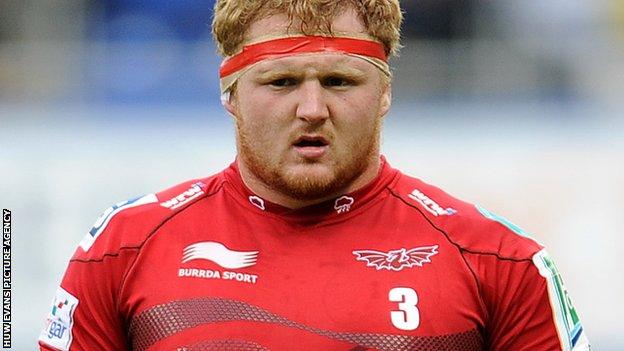 Lee, 19, is in the Wales squad as cover for knee-injury worry Adam Jones.

North made his Wales debut at 18 and says Lee can also step up to the mark for the autumn Tests with Argentina, Samoa, New Zealand and Australia.

"Samson is immense. I don't think anyone knows actually how good he could be and he's tearing it up at the moment.

"So he's a player that I wouldn't mess with, personally.

"I'm glad he's on my own team because he's a hard nut.

"But it's good for him, obviously. It'll be great experience for him to come and train in this environment and get a few caps under his belt."

If Jones overcomes the knee problem that recurred as the Ospreys lost at Leicester in the Heineken Cup at the weekend, Wales may no longer require Lee's services for their autumn series at the Millennium Stadium.

But while Lee's prospects are of interest to North, he is more concerned with what lies ahead, particularly the encounter with World Cup and Championship winners New Zealand on 24 November.

The All Blacks' bid for a record run of Test wins ended with their 18-18 draw against Australia on Saturday.

But the very fact that Richie McCaw and his team had such a target in their sights underlines the challenge ahead for Wales, says North.

"I saw the highlights of their game against Australia," he said.

"It looked like a great game. It was 18-all and New Zealand were going for a record number of wins and that kind of sets the standard.

"If those two can battle for 80 minutes and it comes down to a drop-goal, I think that's the standard we have got to try and compete at if we want to be top three in the world.

"Every team has got its negative points where you can beat them.

"When it comes to the game you have just got to play what you see.

"If they look at us, they can see ways they can beat us, but I'm sure we will sit down, analyse their game and work out different ways of having a crack at them.

"I played the All Blacks in my first home series. It was my third cap. I think I'm an older, wiser player. My game has come on a lot since then.

"You want to get on the pitch to get experience against the world's best team."