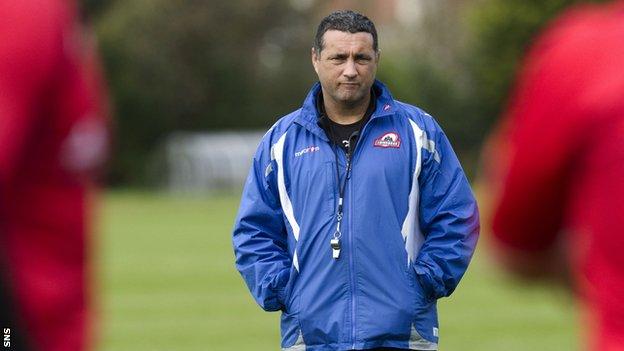 Michael Bradley says his Edinburgh players are keen to atone for heavy defeats in the Heineken Cup.

The Scots lost 45-0 at home to Saracens in their opening match and 33-0 away to Munster last weekend.

"We have to take both of those on the chin. We've let ourselves and the fans down," he said.

"We're happy to be home against the Scarlets (in the Rabo Direct Pro League) this weekend."

Bradley said his players aimed to halt their losing run when they faced the Welsh at Murrayfield on Friday.

"They also lost their two Heineken Cup matches, so both sides are in a dogfight straight away," he said.

Our intention is simply to get back on the winning trail

"Hopefully, we'll come out on the right side of this one.

"Everbody is hurting and it's not easy to take. You very rarely see a zero on the board for Edinburgh and, conversely, we're conceding tries when we needn't concede."

Scotland wing Tim Visser returns to the side after missing the defeat by Munster, but captain Greig Laidlaw has yet to recover from a shoulder injury.

Harry Leonard and Chris Leck start at half-back, with Nick De Luca switching to inside centre and Matt Scott at outside centre.

"Our intention is simply to get back on the winning trail and get back on it as soon as possible," said Bradley.

"The PRO12 is really tight just now. All but the top and bottom teams are on two, three or four wins, so success can shoot you up the table very quickly. But we need to strike now.

"We know we have a lot of talent in our side and we know we're a good rugby team but we haven't been able to show it, so the key this week has been to focus on ourselves and what we can control."