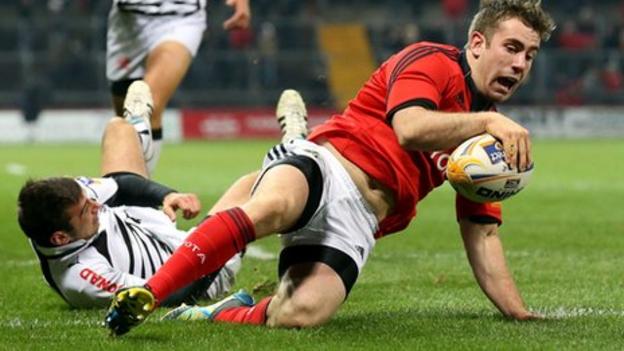 JJ Hanrahan marked his first Munster start with two tries and a man-of-the-match display in the Pro12 victory over Zebre at Thomond Park.

Munster improved in the second half and surged clear through tries from Hanrahan (2) and Felix Jones.

Luke O'Dea dotted down for a 76th-minute bonus-point score.

It was a penalty-riddled start to proceedings in Limerick.

The Italians settled quickly, although their captain Gonzalo Garcia skewed a penalty from his own half well wide.

Munster took a quarter of an hour to get within striking distance and Keatley drew his first penalty attempt wide in the 18th minute.

Munster number eight Paddy Butler was guilty of obstruction off the back of a scrum but Halangahu was unable to convert the resulting kick from the left.

Zebre, with their heavy pack putting their weight about, went off their feet at a central ruck in the 26th minute, allowing Keatley to kick the hosts ahead.

However, both sides struggled to retain possession and build attacks with referee Neil Hennessy eager to keep on top of a messy breakdown and scrum.

Halangahu had the final say before half-time, splitting the posts with his first successful kick after the Italians put pressure on in the scrum.

Five-and-a-half minutes into the second half, Munster finally unlocked the Zebre defence.

Hanrahan backed himself, darting through a gap on the right and getting past Luca Martinelli near the line for a well-taken try.

Keatley converted and just before the hour mark, Jones jinked past four defenders on a eye-catching surge to the whitewash which will have pleased watching Ireland boss Declan Kidney.

With Rob Kearney sidelined through injury, the fit-again Jones looks set to earn a call-up in the coming days for Ireland's November internationals.

The full-back's 56th-minute try was converted by Keatley who supplied the assist and the extras for Hanrahan's second, as the Kerry youngster gobbled up a teasing grubber from the number 10.

With Zebre tiring and Munster finding holes out wide, O'Dea and Jones threatened again before Laulala drew a couple of defenders and passed for O'Dea to finish off the night's scoring in the right corner.