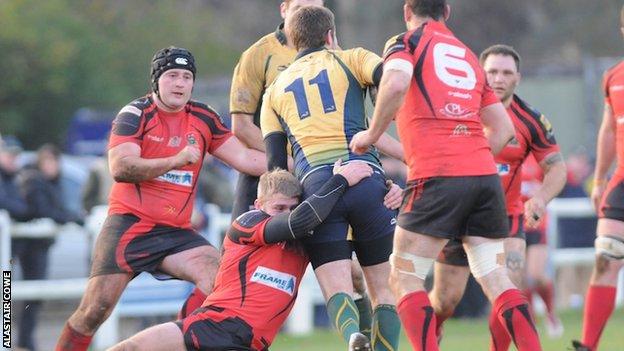 Redruth boss Adrian Edwards praised the club's young players after they won 31-23 at Lydney to stay third in the National Two South table.

The Reds had young fly-half Ashley Hoskins play the full game while centre Dean Bonds and hooker Neal Turner impressed from the bench.

"The ethos at the club is all about bringing our youngsters on," Edwards told BBC Radio Cornwall.

"So to go on the road and get a bonus-point victory, that's fantastic."

Hoskins kicked two first-half penalties and a conversion as Tom Duncan and Lewis Vinnicombe both scored tries to send Redruth into half-time 18-3 ahead.

Vinnicombe got a second just after the break before Sam Parsons scored in his final game for the club before moving to Australia.

"We were comfortable at one stage and seemed to be in control, but a couple of decisions went against us and they came back into, but five points on the road, we'll take that," Edwards said.

And Edwards singled out Tom Duncan for particular praise after he scored yet another try.

"Ten for a number eight already is fantastic."