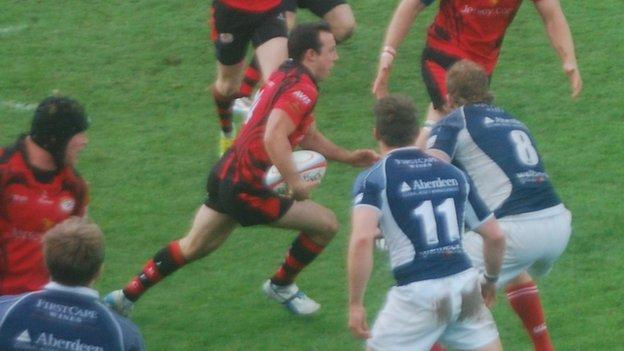 Jersey recorded their first ever RFU Championship victory with a 20-17 win over London Scottish at St Peter.

James Copsey added a second try soon after, before Scottish came back.

Their pressure on Jersey's try-line saw them win a penalty try, as Nathan Hannay was sin-binned, before Jim Thompson's late try set up a nervy end.

The win was crucial for Jersey, who are still bottom of the Championship, after their nearest rivals Doncaster beat Moseley 24-16 on Friday.

The victory was Jersey's second in-a-row after and they are now unbeaten in three matches.

London Scottish boss Simon Amor was proud of his side's fightback as they scored 14 unanswered points in the final 25 minutes, but felt they were responsible for their own downfall.

"I'm very proud of the effort towards the end, but full credit to Jersey, they were a very passionate side," Amor said.

"If we make that many errors and give that many penalties away we're not going to win many games."