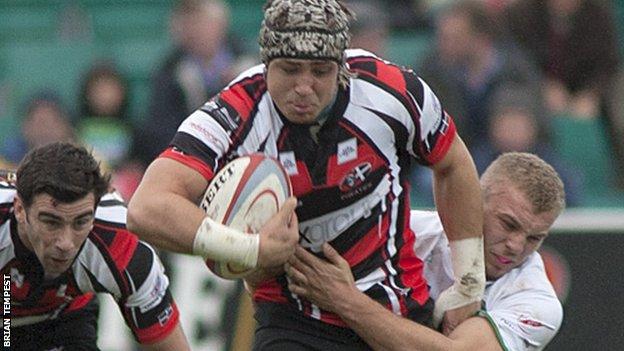 Nowell set up the Pirates' second try and was impressive throughout the match as they got their first Championship win for almost two months.

"He is a talent and long may he continue in a Pirates shirt."

Matt Evans gave the Pirates a 7-0 lead with his seventh try of the season after five minutes.

Joe Ford kicked a penalty soon after before Nowell's brilliant run from his own 22 to that of his opponents' set up a move which saw Gary Johnson to go over.

Two Kieran Hallett penalties put Pirates 18-3 ahead at the break before Jacob Rowan went over early in the second half for Leeds and Hallett ended the game with three more points from his boot.

But Davies felt his side should have won the game by an even bigger margin, had they performed better after half-time.

"It was important to get the win and Leeds didn't get a bonus point, which was also important," Davies said.

"We lost control after half-time and spoke at half-time about trying to commit fewer penalties.

"But lo and behold we gave away five penalties in eight minutes and allowed Leeds to get some momentum.

"But we dominated the scrummage and we've got to make sure that happens every time, every week, every scrum."