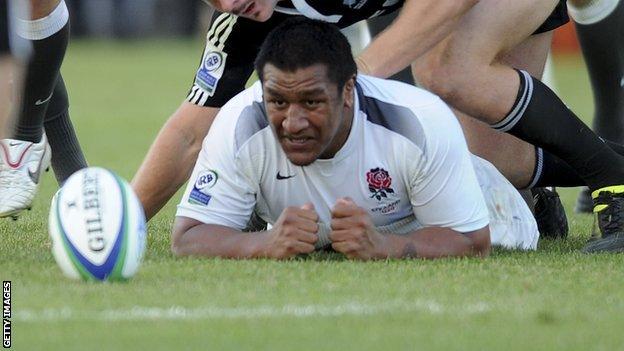 Saracens prop Mako Vunipola has said it was a "massive surprise" to receive an so early in his career.

The 21-year-old has featured for England Under-18s and 20s, but has made only eight starts for his club.

"It was a massive surprise. Mike [Hynard, Saracens coach] mentioned it being in the papers - how I could be a surprise call-up," the prop told BBC Three Counties Radio.

"But I didn't really expect anything. It's a great chance for myself."

Vunipola, who was born in New Zealand and moved to Wales aged eight before growing up in Bristol, joined Saracens from Bristol in the summer of 2011.

Who is Mako Vunipola?

But his first season was restricting him to 10 appearances off the replacements bench.

"Last year was a massive shock to myself. The injuries set me back," he said.

"But in a way they set me up as well to come back harder.

"When you play in the age groups you're aiming for the senior team. I just didn't think it would come this quickly. To get a chance now is a massive honour for me and my family."

The forward comes from strong rugby stock. His father Fe'ao is a former Tonga international who played for Wellington and Pontypridd, while six of his uncles and his grandfather also represented the South Pacific nation.

In addition, his brother Billy has forged a name for himself in the Wasps back row.

But Mako insists he always had his sights set on England honours, despite the fact his cousin, Tongan-born Toby Faletau, chose to represent Wales.

"We used to live in Wales but moved to England. I've lived here most of my life and adopted England as my home country," he said.

"Since I played for the age groups I've aimed for the senior squad.

"It's always going you be hard to get into the final 15, let alone the 23. There's tough competition. I'm a new boy learning. Hopefully I can enjoy the experience."