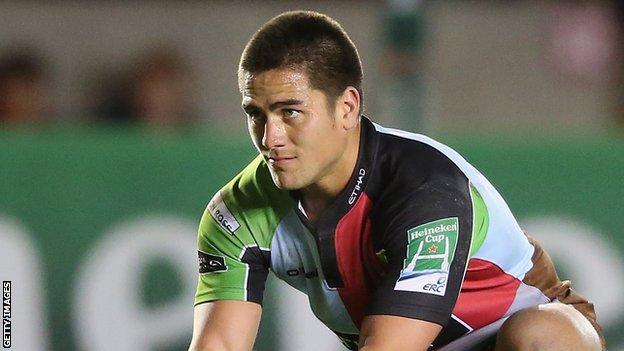 Harlequins fly-half Ben Botica hopes he will be able to continue impressing while Nick Evans is out injured.

The 23-year-old kicked 38 points in the Heineken Cup wins over Biarritz and Connacht after Evans sustained an ankle injury against the French side.

Botica told BBC London 94.9: "I knew that coming to Harlequins I would be waiting and biding my time until I got an opportunity.

"Nick's a top-class player and one day hopefully I can get up to that level."

He added: "Being from New Zealand, we have a distinctive style of playing.

Teams know how we like to play so they look to stop it. Sometimes it works

"I don't get nervous all that easily and I try to keep as calm as possible.

"I haven't had too many complaints. The coaches have said to keep playing my game and take the opportunity while I have it."

Quins return to Aviva Premiership action this weekend when they travel to London Irish on Sunday.

The defending champions lost their last two Premiership games to Saracens and Exeter.

However Botica, the son of rugby league legend Frano, believes their recent exploits in European competition will serve them well.

"It's not easy going away to Connacht and beating them," he said.

"The coaches were happy with how we went and coming off two losses in the Premiership, we're looking to take the form from the Heineken Cup into the Aviva.

"We put the defeats down to Saracens and Exeter playing us out of the game.

"We'll play the way we like to play and hopefully we'll come away with the win."