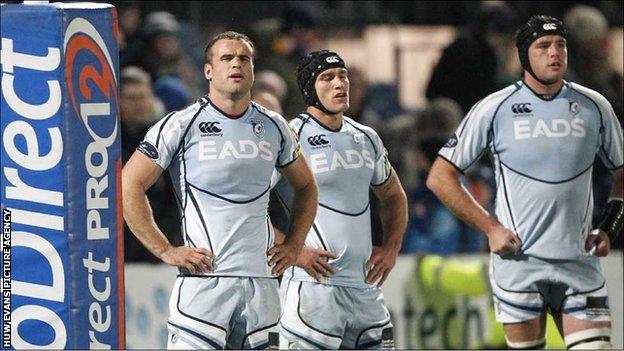 Cardiff Blues director of rugby Phil Davies has dismissed the idea he is under pressure after his side conceded the most points in their history at European champions Leinster.

The Welsh region suffered the second worst loss in their nine-year existence with a at the Royal Dublin Society on Saturday.

But despite a fifth successive defeat, Davies was defiant about his position.

"It is not about my position or about me," he said.

Davies in charge at Cardiff Arms Park in May but when asked about his own future, the 48-year-old admitted: "I don't know.

"There is one person that has changed, there are a lot of things changing in other ways.

"But I've come in and had stick from day one, but it is not about my position or about me.

"It is about the group and the region moving forward, that's the most important thing."

Leinster raced into a 40-3 half-time lead in their nine-try victory against a side the back-to-back Heineken Cup champions beat last season.

"I don't know if I can begin to explain that performance," said Davies, who has three wins from nine games in charge of the Blues.

"It was there for all to see and it wasn't good enough. They are a top side but we gave them too many easy tries in that first half.

"It was 19-all in the second-half and if you look at the stats it was more a game, whereas the first half was not a contest at all.

"The players showed a lot of courage in the second half but it was a hugely disappointing first half."