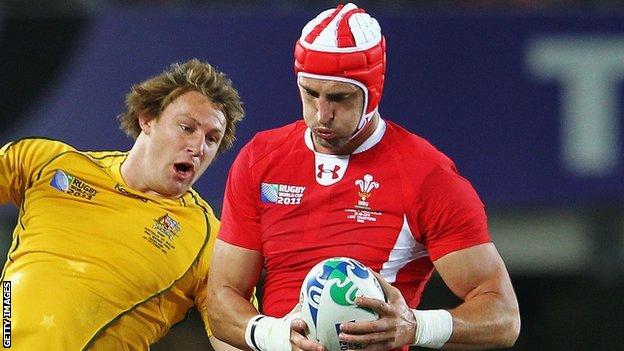 Luke Charteris will be available for Wales' clash with Australia on 1 December after a deal was struck to release the Perpignan lock.

That date falls outside the International Rugby Board's official window for Test matches and clubs are not obliged to release their players.

Perpignan confirmed to BBC Wales Sport that Charteris will instead miss the Test with Argentina on 10 November.

The French club have a tricky Top 14 match away to Biarritz that day.

"We are delighted to have come to an agreement with Perpignan which will allow Luke to be available to be considered for selection for the Wallabies game," said Howley, who travelled to France alongside head coach Warren Gatland last month to begin discussions about the release of Wales' overseas contingent.

"This is a major step forward for us and shows that our trip out to France to talk face to face with the clubs has paid dividends.

"We have reached a compromise which allows Perpignan to have Luke available to them when they need him most and see no reason why we can't build on this relationship in the future."

The French club face league strugglers Agen at home on 1 December and have decided that they would be better served having the 6ft 9in Charteris available against Biarritz.

Charteris will also not be required to enter a training camp with Wales a week before the Pumas clash and will instead be able to play for Perpignan against Castres on 1 November.

However, there is no indication that a similar agreement has been reached over Wales fly-half James Hook, who also plays for Perpignan.

After opening the autumn series against Argentina in Cardiff, Wales then welcome Samoa, New Zealand and the Wallabies to the Millennium Stadium on successive weekends.

Wales still face being understrength against Australia as scrum-half Mike Phillips is at Bayonne, while props Gethin Jenkins at Toulon and Paul James at Bath are also not guaranteed to be released.

British and Irish Lions tight-head prop Adam Jones has already been ruled out for the autumn series, after the Osprey suffered a recurrence of a knee injury.

That leaves Wales with the prospect of being without their three front-line props against a Wallabies side they have not beaten in the past seven attempts.

Wales are also without first-choice blind-side Dan Lydiate for the autumn series after the Newport Gwent Dragons star suffered an ankle fracture.

As part of their preparations for the autumn series, the Wales squad have returned to Spala in Poland for a training camp from Monday, 29 October to 5 November, although they will be without those players contracted to French and English clubs.