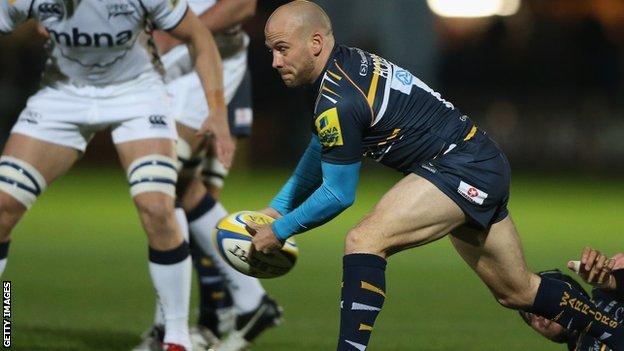 Worcester led by seven points when Hodgson's challenge on Will Addison ensured a 23-16 victory for Warriors.

"It was a fantastic tackle," Hill told BBC Hereford & Worcester. "He's come back from a severe concussion - to have the guts to make it was outstanding and shows what a character he is."

"It was a great try-saving tackle - it saved us two points."

After the final whistle, both Hodgson and Addison received treatment from the physios following the collision, and Hill believes Hodgson's commitment summed up his side's defensive efforts.

"It was bravery and a fantastic effort in the corner that kept us with four points," Hill stated.

"We had some heroic defensive work epitomised by Paul at the end.

"Considering we haven't done much defensive work in the last two games in the Amlin Challenge Cup, some of the defence was absolutely superb, particularly from the forwards."

Worcester returned to Premiership action following comprehensive victories over Rovigo and Gernika in the Challenge Cup, where they broke the European points haul record on two consecutive weekends.

However, despite their success in Europe, Hill feels this was not ideal preparation for the pace of the game against Sale.

"I think we looked rusty. There's always a problem when you come back off two Challenge games," Hill stated.

"Sale, having had [Heineken Cup] matches against Cardiff and Montpellier, were a bit more battle-hardened than us.

"Some of our game management needed to be looked at as we played a lot of rugby in our own half and caused quite a few problems for ourselves.

"We weren't at our best but we just had enough to repel Sale at the end."