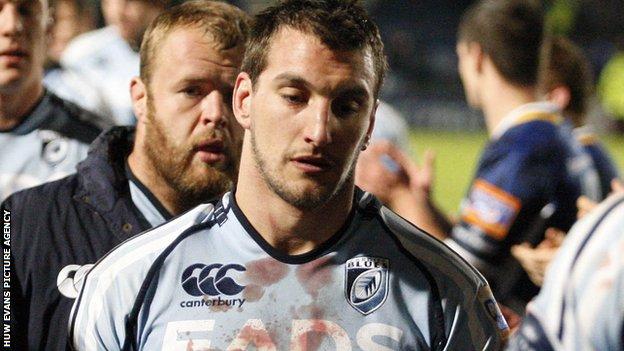 Former back-row forward Emyr Lewis says Wales' players will need to perform better on the international stage than they have at regional level recently.

Lewis, who won 41 caps, feels there is plenty of room for improvement from squad members.

"I'm concerned at the way the regions are playing at the moment," Lewis said.

"Hopefully our key players can start playing better. They do seem to raise their game when they play for Wales.

"I don't know whether it's the fact that they respond better to the coaching set-up with Wales.

"I just hope the same thing is going to happen this autumn otherwise it's going to be a long four games for us."

The Ospreys were the only region to have won in the Heineken Cup so far this season.

The Wales squad are spending the week at a training camp in Spala in Poland preparing for the autumn series, which opens against Argentina in Cardiff on 10 November

Wales then host Samoa, New Zealand and Australia at the Millennium Stadium on successive weekends.

Luke Charteris will be available for Wales' clash with Australia on 1 December after a deal was struck to release the Perpignan lock.

That date falls outside the International Rugby Board's official window for Test matches and clubs are not obliged to release their players.

Perpignan have confirmed Charteris will instead miss the Test with Argentina on 10 November and Lewis is pleased the former Newport Gwent Dragons player will be available for the Wallabies fixture.

"It's very important especially with a hard sequence of games leading up to Australia and no doubt Wales will pick up injuries," Lewis said.

"The talk is Charteris is playing very, very well for Perpignan at the moment."