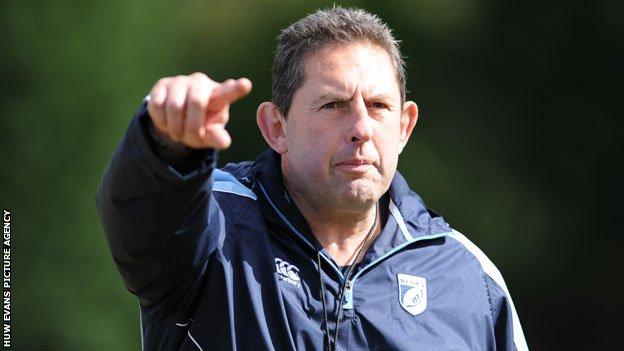 Cardiff Blues director of rugby Phil Davies is confident he can bring silverware to the Arms Park, but warns it might take some time.

The Welsh region have lost five consecutive matches in all competitions following their 59-22 thrashing by Leinster on Saturday.

Davies reiterated he was under no pressure from the region's board.

"This is the start of a transformation period, we can deliver trophies in the future," Davies said.

The Blues' current losing run is their worst since the 2004/2005 season, and Davies has faced questions about his future and whether he was under pressure from the region's board.

"The board are excellent, one of the best boards I've worked for," said the former Leeds Tykes director of rugby.

"It's a case of where we stick together and move it on and we get better, hopefully."

Davies added he was happy with his relationship with the region's chairman and financial backer, Peter Thomas.

"Peter's fantastic. In many ways he's like me, he hates losing," Davies said.

"When I look back through history we've been in this position before and we built into winning the Amlin [Cup] and EDF [Energy Cup].

"But that was done over a 10-year period and this is the start of a transformation period again."

The Blues are lying seventh in the Pro12 table with three wins from seven games and are bottom of Pool Six in the Heineken Cup after defeats by Sale and Toulon.

They are back in action o in a Pro12 match at Cardiff Arms Park.

The Welsh region will be without eight players who are in Poland with Wales preparing for the autumn internationals.