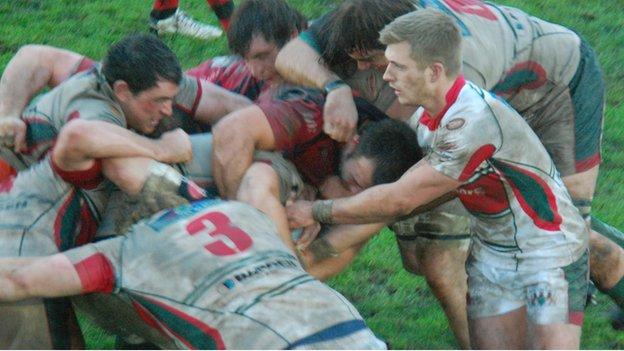 The islanders took an early lead when James Copsey intercepted deep in his own half and ran clear to touch down.

Aaron Carpenter's try put Albion ahead though and they were 11-10 up at the break.

Paul Roberts's penalty extended the lead but Le Bourgeois's nerves held strong with two penalties to lift Jersey off the bottom of the table.

Some basic decision-making from us really let us down today

The result, in front of 1,894 supporters at a muddy St Peter, means Jersey leapfrog Doncaster Knights, who lost 38-20 at Rotherham.

"I've got a huge amount of respect for all the lads because I know how much hard work they've put in," said Jersey boss Ben Harvey.

"Now it's starting to come to fruition and they've got some self-belief.

"I don't look at the league tables, I just feel as though we're getting our rewards because we're performing so well."

While Jersey are now unbeaten in four matches, Albion have lost five in a row in all competitions.

"The conditions played a big part and for Jersey it's their home ground and they're used to it.

"Some basic decision-making from us really let us down today."