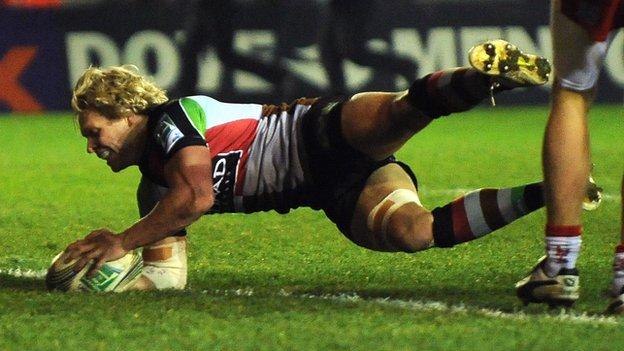 Harlequins centre Matt Hopper has signed a new two-year contract extension to keep him at the Premiership champions until 2015.

Hopper, 27, has featured in 22 games since signing from Cornish Pirates and played for England Saxons in January.

"In my short time at the club, I have been impressed with the level of dedication and passion shown by all members of the squad," he said.

"I am thankful to have been a part of this," he added.

"The style of rugby we are looking to play, matched by such a talented group of players, made my decision to stay very easy.

"I look forward to competing for a regular starting spot over coming seasons and hopefully being an integral part of what is already a successful team."

Director of rugby Conor O'Shea added: "Matt is up there with the most competitive individuals any of our coaches have ever come across.

"His drive to be the best he can be is second to none and in just over a year since joining the club, he has represented England at Saxons level, played in some historic wins for this club and contributed greatly to us winning the Aviva Premiership."