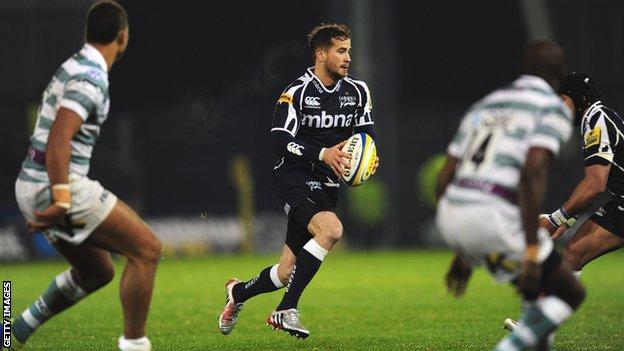 Bottom side Sale marked Steve Diamond's first game back in charge by securing their first Premiership win of the season with victory over London Irish.

Chief executive Diamond has returned to the director of rugby role and he saw Nick Macleod and Johnny Leota score well-worked tries as the Sharks led 15-3 at the break.

In all the Exiles could only muster three Ian Humphreys penalties in reply.

Sale's dire start to the season saw them rooted to the bottom of the table after seven consecutive defeats and the Manchester side responded by re-jigging their coaching line-up.

Bryan Redpath - recruited in the summer to be director of rugby - was demoted to head coach with Diamond once again exchanging board room for changing room, as he had done at the end of last season.

And the abrasive former hooker seemed to have an immediate impact, although the Sharks remain bottom of the table on six points, four behind both London Irish and London Welsh.

The hosts and Australia international Cameron Shepherd to late fitness tests before kick-off and it seemed to affect their start to the game.

In pouring rain Irish had much the better of the opening exchanges but Sale were on the board after their first foray into Exiles territory when Macleod landed a seventh-minute penalty.

Diamond's imprint was all over the forwards as they gained the upper hand and Macleod added the opening try after sustained pressure from the Sharks pack.

A driving maul from a line-out splintered Irish's defence and the full-back was bundled over after initially being hauled down short of the line, although the score went unconverted.

Humphreys pulled three points back for Irish on 25 minutes but just after the half hour Leota latched onto Cipriani's inside pass and ripped through Irish for his first Premiership try of the season.

Cipriani, who marked his 25th birthday with his best Premiership performance for Sale, took over the kicking duties to take the hosts into the dressing room 15-3 up.

Rob Miller replaced Macleod, who was carrying a knock, at half-time but Irish doubled their total through Humphreys early on.

The Exiles freshened up their pack with a triple substitution, as Sale started to gain dominance up front once more, introducing Leo Halavatu, George Skivington and Ofisa Treviranus on 50 minutes.

It steadied the visitors and Humphreys took advantage of some weak defending to make a break that lead to his third shot at goal - which he converted for three out of three on the night.

Cipriani had a chance to reestablish Sale's advantage soon after but the stand-off lost his footing and missed.

The Sharks began to look lethargic but when scrum-half Dwayne Peel came off the bench on 73 minutes his vitality spurred the hosts into life.

Within a minute Cipriani's second successful kick took the bonus point away from the visitors and with three minutes to go he added a third from four attempts.

"The week's been different - but the coaching team behind the scenes know what they're doing. The lads paid attention to what we've done in the week and we managed to get a hard-fought win.

"We stuck to the game plan and we played well in the first half.

"We had a shaky start at the start of the second half where we gave the ball away six or seven times through handling errors.

"We've managed to get our scrum sorted out to a large extent and our line-out's effective."

"We were on a five-day turnaround which is a little difficult, but we had the added issue of the international players being unable to train.

"We were patched up, but fair play to Sale as they got hold of the game early.

"We lost our discipline and that cost us, but fair play to them, they scored twice against us and we fell off tackles against their power centres a couple of times.

"We believed we could peg them back so we made a tactical change to play with three locks in an attempt to try and squeeze them.

"At 15-9 we looked like we were going to turn things around, but at the end of the day we came away without even a bonus point so we've got egg on our face now."