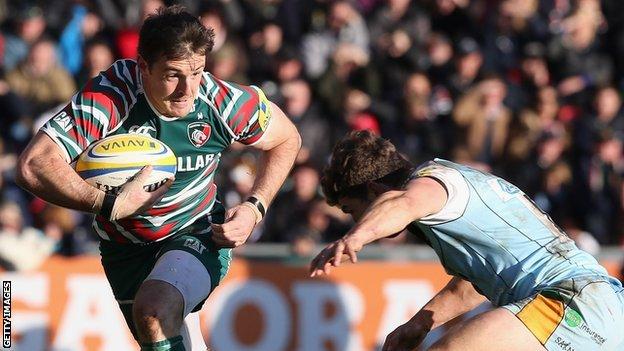 Tigers replacement Vereniki Goneva made an instant impact as he set up Smith, who scored the only try of the game.

Teenager George Ford, 19, kicked the other 11 points for the hosts but he also missed five further penalties.

All of Saints' points came from the boot of Ryan Lamb but it was not enough as Northampton fell to their third successive loss in all competitions.

Both teams were affected by injuries and international call-ups with Leicester missing six players from their 27-21 defeat away at Gloucester last weekend.

Saints made four changes from their side which lost 16-6 against Saracens but they were able to call on captain Phil Dowson, following his release from the England squad.

In front of a capacity crowd of 24,000, Lamb put the visitors 6-0 ahead with two penalties, following Richard Thorpe going offside and the Tigers then deliberately collapsing a scrum.

Ford missed two penalties inside a minute but he was successful with his third attempt to bring his side within three points.

The Tigers nearly took the lead when a chip forward by Niall Morris crossed the try-line but Lamb, who misjudged the first bounce, recovered just in time before the diving Ben Youngs could touch down.

Ford missed another penalty, his third failure in four attempts, while Lamb failed at the other end with a drop-goal attempt.

But the sides went in level at half-time as Ford, who was making only his second start of the season, kicked his second penalty late in the first half.

Leicester introduced Goneva at the start of the second half and the Fijian made an instant impact as he collected a Ford pass, burst through two challenges and offloaded to Smith, who scored before Ford converted.

Lamb kicked another penalty but then hit the post with another effort as Leicester had a let-off for their ill-discipline.

But a late challenge from Northampton hooker Mike Haywood on Leicester captain Geordan Murphy gave Ford the opportunity to add another three points, although he later missed two further chances to end with only four successes from nine attempts.

Another Lamb penalty brought Northampton to within four points, but the Saints ended the match with 14 men as Lamb was sin-binned following a challenge on Anthony Allen and Leicester held on for the victory.

"George is a very good player. Today, he had an off day with the boot, but he did some very good things with ball in hand.

"He will learn from it. He has had some pretty good days as well - in a semi-final and a final last season - and that is part and parcel of young people developing.

"I will put my arm around him and encourage him, and we will carry on. People want him to play all the time or go somewhere else to play, but we have to develop George and look after him.

"He will play enough rugby here along with Toby Flood. If you want to play for England, play here in front of Toby and then you will be in the England team."

"Generally, our defensive game was very good, apart from conceding a try early in the second half.

"I thought Calum [Clark] was outstanding. To come back and play 80 minutes when you have been out for so long in such an intensive game as that was very good.

"We have got no doubt with Calum about where he is. He is one of our leaders, and we have missed him."