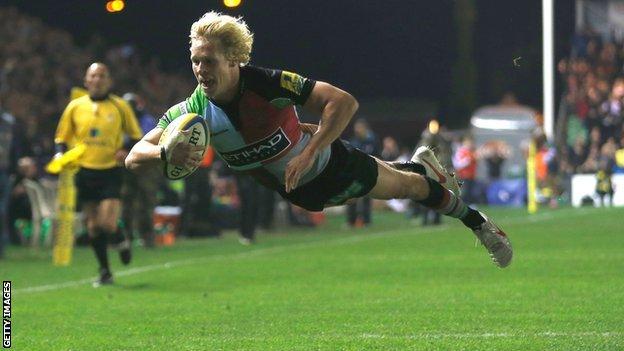 Harlequins moved three points clear at the top of the Premiership with a narrow victory over Gloucester.

Mike Brown scored the first try as Harlequins made the better start, before three straight penalties from Freddie Burns put Gloucester ahead.

Matt Hopper and Sam Smith scored tries just before the break as the hosts had a 22-12 half-time lead.

Billy Twelvetrees went over in injury time and Burns took his tally to 20 points, but Quins hung on.

Gloucester went into the game on the back of last week's with both sides looking for a sixth win in eight Premiership matches.

The first points of the night went the home side's way as Evans successfully kicked from the 10-metre line, while Burns responded with his first penalty.

A great break from James Johnston enabled Brown to go over in the left-hand corner - a try given after a TMO referral - and Evans kicked the extras.

Burns landed three straight penalties to give Gloucester the lead for the first time, but that was soon cancelled out by a stunning try by the hosts.

A quick tap from Karl Dickson sent Tom Williams free and his clever dummy-play freed Hopper, who signed a this week, to go over in the corner, although Evans missed the extras.

Smith intercepted James Simpson-Daniel's pass on his own 10-metre for a runaway try four minutes later, and this time Evans kicked the conversion to give Harlequins a 22-12 lead at half-time.

The hosts, who won last weekend, were pegged back five minutes after the break when Burns added a fifth penalty.

Shane Monahan's yellow card reduced Gloucester to 14 men for 10 minutes and Evans failed in his attempt to increase the home side's lead to 10 points again with a missed penalty.

The New Zealander was successful three minutes later, although Burns immediately reduced the arrears with his sixth penalty from six attempts.

Harlequins could have sewn the game up in the second half but sloppiness in Gloucester's 22 saw a number of chances go begging.

Evans seemed to calm any home side's nerves with his third penalty, before the visitors were reduced to 14 men for a second time as Ben Morgan was sent to the sin bin for illegally disrupting a Quins attack.

Twelvetrees' late try secured a bonus point for Gloucester and Burns kicked the extras, but Harlequins had done enough to go clear at the top of the table.